The hidden face of the dune 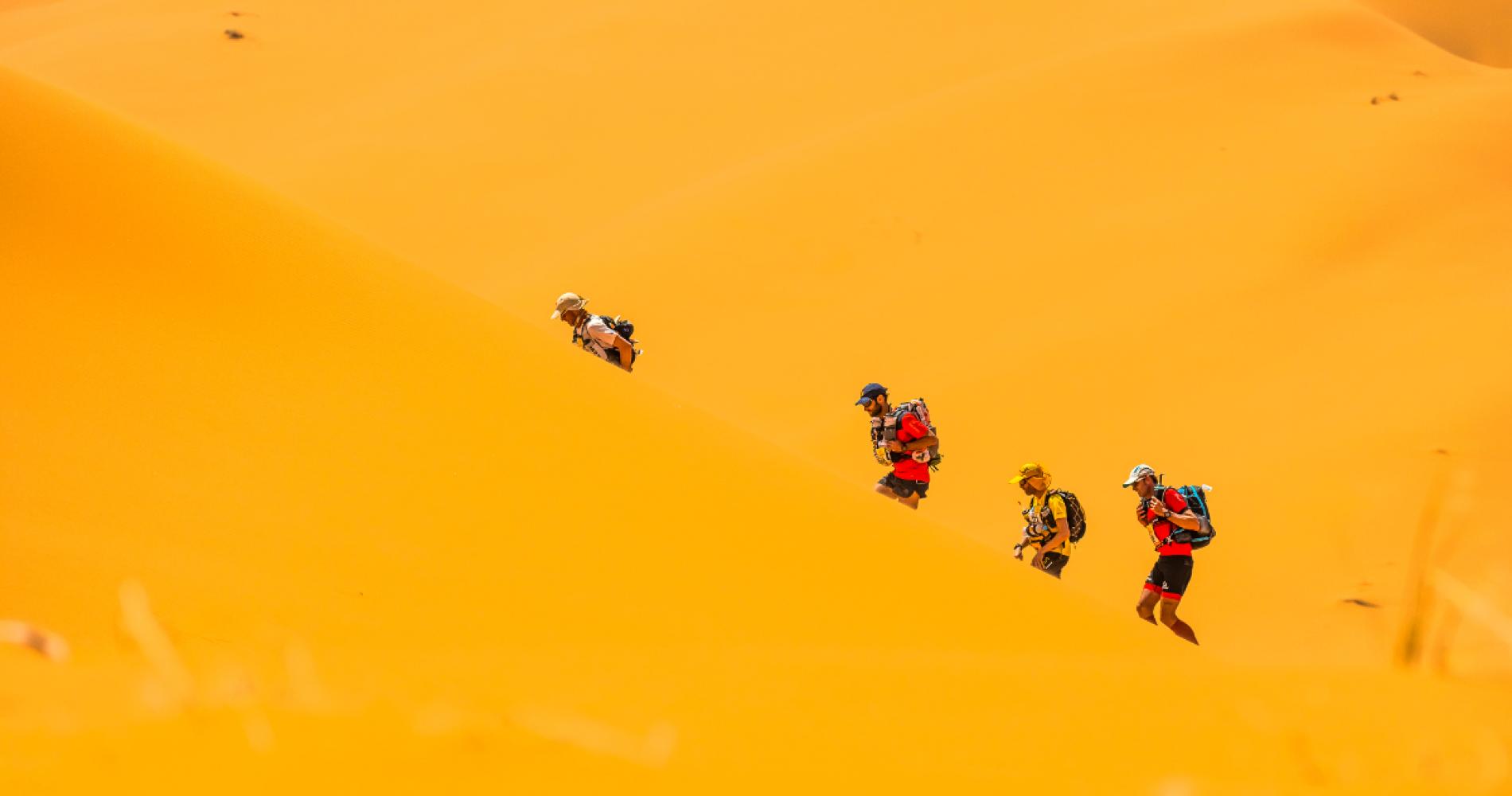 A second 32-km stage, of which 13 km in a field of 100-m high dunes: such was today's challenge for the 781 survivors of this 34th MARATHON DES SABLES. No piece of cake for anyone: even the elite runner didn't come out unscathed.

THE STAGE OF THE DAY: STAGE 2

Description: the first highlight of this 34th edition, with the crossing of a 13-km section of erg Chebbi, better known as the Merzouga dunes. This morning, a pack of 781 competitors took the start of the second stage of the 34th MARATHON DES SABLES. Indeed, two Italian competitors had to leave the caravan after Stage 1 – one for medical reasons, the other to stay with his buddy: that's also what solidarity is about – being present even in the toughest moments.

On the bivouac, before the start, competitors were glancing towards the "monster" that could be seen in the distance: erg Chebbi. It is the largest dune field in all of Morocco: 22 km long, 5 km wide and 150-m high dunes. When covering the 13-km section at the heart of the erg, competitors "only" had to climb 100-m high dunes – merely the height of a 30-storey building… "I'm not thinking about what is ahead of us", said Barbara SENAC (D640-SEN), who is participating in her first MDS. "I'm just going to take things as they come..."

Even experienced competitors, such as Vincent GAUDIN (D802-FRA), couldn't hide their anxiety when thinking about erg Chebbi: "I've taken part in many ultra-trails, but this is my first multi-stage race and – obviously – my first MDS. Yesterday, I started slowly and carefully, but today's stage is supposed to be very tough...with all those dunes..."

And the dunes and the scorching heat indeed left their toll: at 2 PM local time, half a dozen competitors had already dropped out during a stage that will leave traces. The very athletic runner Ragna DEBATS (D819-NED) left no chance to her chasers during this second stage. She immediately took the lead and overcame the difficulties one after the other. "Thirteen kilometres of dunes, that was a first for me. I loved it...it was grand! Temperatures were really hot, and I think that later in the day, people will suffer..." In the scratch classification, Ragna currently has the tenth place – and she might not stop now!

For the second time, Aziza RAJI (D630-MAR) took the third place of the stage – a place that does not exactly satisfy her: "I didn't have the opportunity to train on this type of terrain. Still, I was able to make it to the Top 3. I hope to perform even better in the next stages."

In the general classification, Ragna DEBATS further increases the gap with Aziza RAJI (more than 1hr 15min) and Meghan HICKS (1hr 25min). Last year's winner Brit Gemma GAME (D2-GBR) is currently in the 5th place. Laurence KLEIN (D81-FRA), who came to celebrate her 50th birthday in the desert, ranks 10th and is the second French female runner behind Veteran 2 Mireille MULL JOCHEM, whose ambition was to make it to the Top 10. A 100% French duo reached CP1 first this morning for this Stage 2 of the 34th MARATHON DES SABLES, revealing once again the Moroccan strategy – letting chasers lead at the beginning of the stage, then taking the lead back during the second part by acting as a team: "I did a great job for our team", Abdelkader EL MOUAZIZ (D7-MAR) explains: "I was in charge of the compass in the dunes." As a matter of fact, in the immense dunes of erg Chebbi, route marking was impossible, and competitors only had a course to follow. This proved highly detrimental to Julien CHORIER (D4-FRA), who got lost and finished the stage in the 16th position.

In the front, Rachid EL MORABITY (D1-MAR) let his younger brother Mohamed (D8-MAR) win the stage by a few seconds, and the podium was logically completed by their teammate Abdelkader.

The first French runner, Mérile ROBERT (D3-FRA), finished this difficult stage in a beautiful fifth place: "I wanted to be in front at the entrance of the dune field, but then, the rest of the group caught up with me. I had to slow down just before CP2, but the gaps are not huge. Tomorrow, the stage will be somewhat longer, and then comes the Long Stage, where everything will be decided."

In the general classification, the Moroccans confirm their domination, merely upset by the beautiful performance of Antonio ALONGI (D719-ITA), who is now fourth thanks to his excellent performance in today's stage.