THE MARATHON DES SABLES IS HARDER IN REALITY THAN ON PAPER 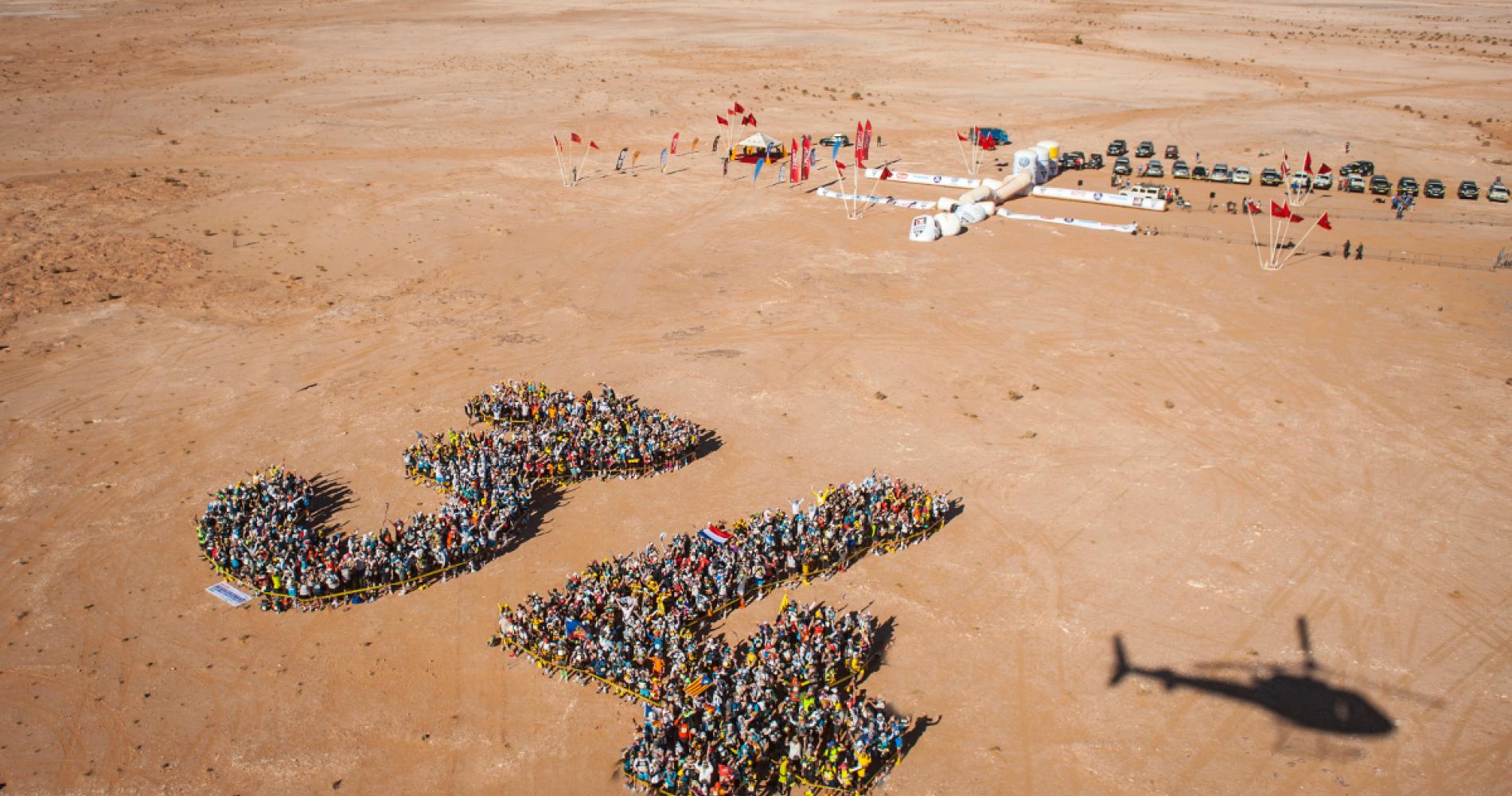 The top favourite runners Rachid EL MORABITY (MAR) and Ragna DEBATS (NED) reigned over this first stage of the 34th MARATHON DES SABLES. Behind them, the average competitors struggled with the scorching heat to make it to the finish line. Among them, the 44 members of the Terres d'Aventure team stuck together during a stage that proved much harder in reality than on paper...

THE STAGE OF THE DAY: STAGE 1

Description: a greatly varied stage (4 dune fields, a small rocky ascent, flat areas, one wadi) that gave a perfect foretaste of what is yet to come Patrick BAUER, the Race Director, was radiant this morning when he gave the start of the 34th MARATHON DES SABLES, at 9 AM sharp. In front of his 4x4, he had an audience of precisely 783 competitors who carefully listened to his advice before setting off on this first stage of 32.2 km. Under their soles, the desert showed its multiple faces: stony plains, small dune fields, a rocky ascent, and a wadi where the heavy rainfall of the last weeks had already vanished... All this under a scorching heat – 26.6°C at noon (screened), but with a very high radiation effect that gave the feeling of being inside an "oven". Those competitors used to intense heat were delighted, while inhabitants of "Nordic" countries suffered... Before the start, Corsican couple Josée and Vincent CUMBO (D200/201-FRA) were feeling "both very excited and anxious, because even though Corsica is a warm place, it's not as hot as here…"

On paper, this first stage seemed rather easy, but in reality, things proved quite different: "It seemed an easy and flat terrain, but each time you set off on the first stage of the MDS, you realize that you have just started a very difficult week and that after this stage, you still have 200 km left... You really need to carefully manage your energy. That's what I did…but still, I finished the stage past the red line," explains Frédéric DE LANOUVELLE (D661-FRA). It's a record on the MARATHON DES SABLES: the TERRES D'AVENTURE team counts no less than 44 competitors – with very diverse profiles gathered under the banner of the travel agency acting as an official partner of the MDS. Lionel HABASQUE (D111-FRA), CEO of TERRES D’AVENTURE, is taking part in his third MDS. "My last participation was in 2014, so I had enough time to forget the difficult moments," he said with a laugh, before introducing his team: "We have newcomers, returning participants and many youngsters – it's a beautiful mix. We even have a few top runners who came to join us. They're helping us, with many useful tips. We also have a competitor, Xavier, who crafted his backpack from A to Z. All these profiles interact...it's a great source of motivation! It's the team that encourages us to keep going." Also worthy of noting is the fact that for this 34th edition of the MDS, TERRES D’AVENTURE has offered to carbon offset the event's emissions via its Foundation 'Insolite Bâtisseur Philippe Romero', which is implementing reforestation projects in Peru, Senegal, India and Indonesia. A first that is perfectly in line with the "zero environmental impact" approach of the MARATHON DES SABLES. Trail World Champion in 2018, Ragna DEBATS (D819-NED) immediately led the first stage and is quite clear about her ambition of victory for her first participation: "It's important for me to be happy and have good feelings, but this is a race and when I part in a race, my objective is to win!"

She led her chaser Aziza RAJI (D630-MAR) by more than 25 minutes, which is absolutely huge for one single stage. Aziza is participating in the MDS for the second time and finished sixth last year: "Competition was harsh, particularly with Ragna DEBATS. But I ran well on the course and did my best to duly represent the Kingdom of Morocco."

In the third place, French runner and three-time winner Laurence KLEIN (D081-FRA) seems surprised but is very happy about her return on the MDS: "I'm back in the desert after many years! I'm so delighted! The first stage was rather flat, so for a road specialist like me, it was quite easy. Conditions were good, and it's a great pleasure to see the desert, the friends and the Berber villages again." This morning, Rachid EL MORABITY (D001-MAR) set off amongst 782 fellow competitors. Nevertheless, as usual, he let his direct contestants, such as Abdelaziz BAGHAZZA (D791-MAR), take the lead at the beginning of the stage, before accelerating and winning the stage more than one minute ahead of his younger brother Mohamed (D008-MAR). "I'm very happy. The first stage was very tough: despite several flat sections, there were many dune fields. But thanks to my experience, I was able to win the stage."

With his fourth place, Abdelkader EL MOUAZIZ (D007-MAR) didn't hide his satisfaction: "Our goal is to win the race both individually and as a team, so this year, we had an intense preparation camp in Ifrane, at an altitude of 2,000 m, and now, we're ready to perform. Mérile defeated me last year during the Long Stage, but this year, I don't think he will."

The first non-Moroccan competitor is Spaniard Alejandro FRAGUELA (D743-ESP), in the sixth rank this year after his seventh place in last year's general classification for his first participation. Julien CHORIER (D004-FRA), the first French runner, arrived just a few seconds after him. Mérile ROBERT (D003-FRA), who finished third last year, is "only" in the tenth place: "I had difficulty in finding the right pace – today was definitely not my day… »

POSTPONEMENT OF THE 35th MARATHON DES SABLES TO OCTOBER 2021