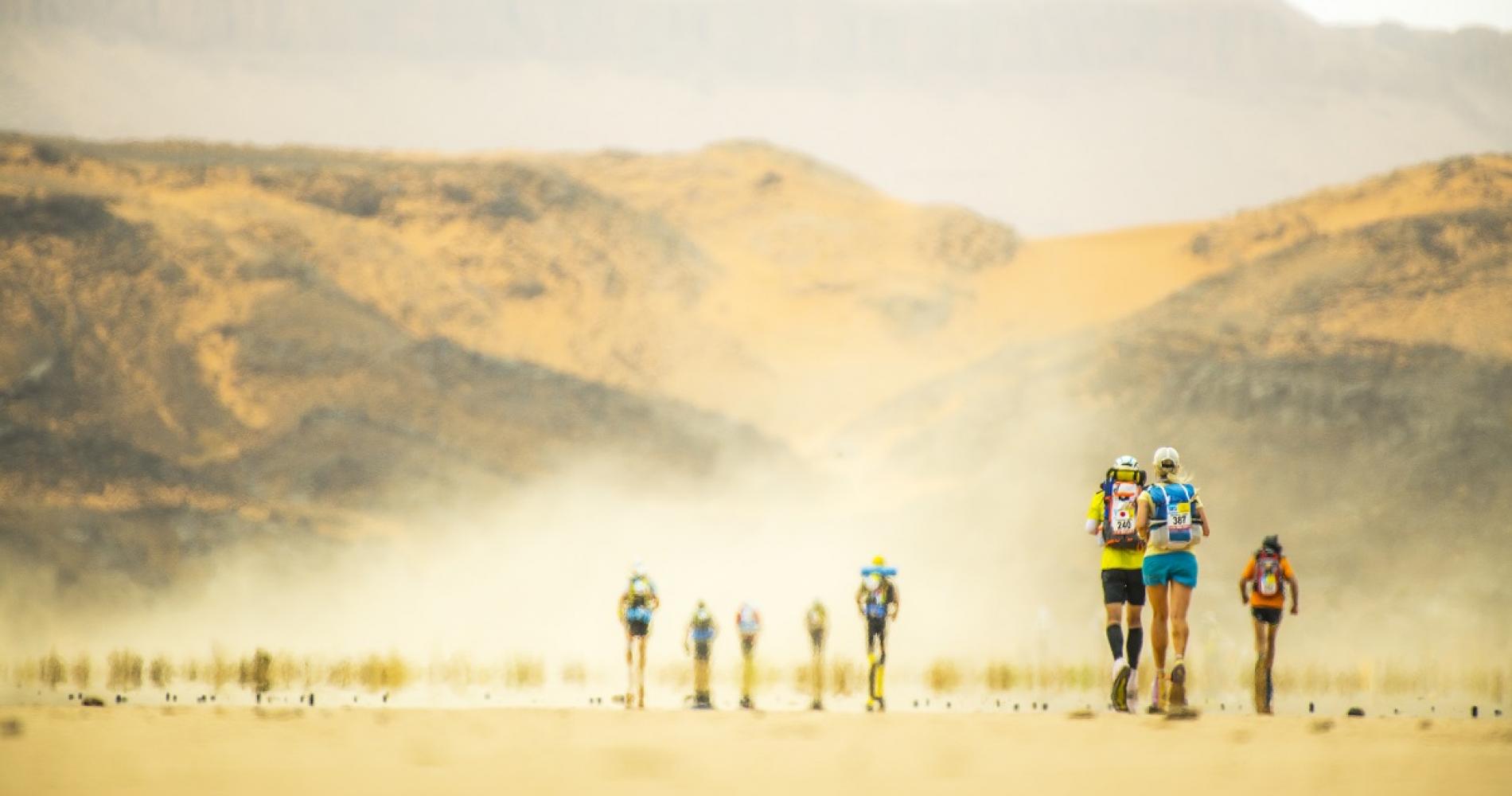 The 34th edition of the MARATHON DES SABLES has discovered its winners: Ragna DEBATS and Rachid EL MORABITY. With 7 titles of this legendary race, this latter proceeds towards his ultimate goal: reaching 10 victories

This morning again, the start of the 756 survivors of this 34th edition of the MARATHON DES SABLES took place in two waves. At 7 AM, the bulk of the pack prepared the way, frightened by the impressive mass of jebel El Otfal which had to be climbed to access the rest of the course. Three hours later, the Top 150 runners in the scratch classification set off in pursuit of them, with the firm intention to give everything to make the best performance possible. For this fifth stage, the course in no walk in the park, with the famous jebel El Otfal as a climax – a 250-metre-high sandy mountain with an average slope of 25%. A real challenge, yet a magnificent place that did not leave competitors unmoved: "I loved the ascent...I'm a mountain fan and here, I got my money's worth", thanked Vincent PILET (D324-FRA) on the finish line. "I have ants in my pants...it was fantastic. I'm so happy!" Peter JEWITT (D075-AUS) added. But once the joy of the finish is over, tiredness engulfs both body and mind: "I'm exhausted. It's been a long week," commented David BRADLEY (D396-GBR). Even former champions such as Laurence KLEIN (D081-FRA), who participated in this MDS for her 50th anniversary, suffered despite her three victories: "For this one, I really had to reach far down…"

Arriving at the bivouac left everyone speechless: bordered by the Zireg mountains, the camp is surrounded by a sandy plain covered with green spots. The place is majestic and strengthens the feeling of smallness that can be felt at the heart of the Sahara. Thus, at the finish line, emotion is palpable, like for Nathalie BAULIEU (D788-CAN): "I'm really happy...slightly nostalgic that it's coming to an end. I think I started crying 5 km before the finish line." Even seasoned competitors, such as Vincent GAUDIN (D802-FRA), shed a tear at the finish: "I've participated in many events, I'm a jaded guy and didn't think I would be so emotional...but when I crossed the finish line, emotions overwhelmed me. No, really: the MDS is a legend."

As usual, Patrick BAUER, the Race Director, awaited every single competitor – from the first to the last – to give them their Finisher medal. This 70-gramme metal object attached to a red lace is the climax of this week of walking or running at the heart of the Sahara. And though these voluntary desert castaways were immensely happy to cross the finish line of the 'Marathon' stage, the comments here and there showed an ounce of sadness: tomorrow, the 'Solidarité MARATHON DES SABLES' stage will only be 6.1 km long, and then it will already be the end of the adventure…

Cactus joined the caravan of the MARATHON DES SABLES at K13 of Stage 2, and since then, he's been following the MDS runners: this beautiful dog, perfectly adapted to life in the desert, left the inn where he was living, close to the Merzouga dunes, to put on the gear of an MDS participant for a week. He covered 175 km in the desert, supporting this or that runner to his liking. Obviously, he's been checked to make sure his health was not in danger, and regularly fed and hydrated. The story seems incredible, but her mistress, the inn's owner, affirms that he regularly disappears in the desert for one day or more. Tomorrow, she will come to pick him up at the finish line of the 'SOLIDARITÉ MARATHON DES SABLES' stage, with his Finisher medal around the neck. Ragna DEBATS (D819-NED) aced the 34th edition of the MARATHON DES SABLES: winner of each of the five stages, her clear ambition was also to be as high as possible in the scratch classification, and she's been quite successful since she finishes at the twelfth place, 4 hours after champion Rachid EL MORABITY (D001-MAR). For her first MDS participation, she suffered from back chafing because she was not used to carrying such a cumbersome and heavy backpack. But her determination did not fail. Aged 40, the 2018 Trail World Champion wins a prestigious title in a legendary race.

33-year-old Moroccan Aziza RAJI (D630-MAR), who dreams of taking the helm of Touda DIDI, the only Moroccan runner to have won the MDS, is getting closer to her objective with her beautiful second place. Sixth last year for her first participation, this year, she finished ahead of Gemma GAME (D002-GBR), victorious in 2019. A good omen for the coming years: Morocco is dreaming of a double Man-Woman victory, possibly in 2020 for the 35th edition?

Mohamed EL MORABITY (D001-MAR) proceeds towards his ultimate goal: equalling Lahcen AHANSAL and his fabulous record of 10 victories at the MARATHON DES SABLES. He could even beat it and make an indelible impact on the race, together with his younger brother Mohamed (D008-MAR), who finished this 34th MDS in the second place. He now has 7 victories, and his radiant smile perfectly reflects his joy: "I'm very happy to win...the MARATHON DES SABLES remains the great adventure I love." For the time being, Mohamed, Rachid's ten-year younger brother, remains in the shadow of his elder brother: "For me, it was important to finish, and that Rachid won, and the TGCC team too. We achieved this result thanks to our hard work."

The first French runner, Mérile ROBERT (D003-FRA), did not repeat his incredible performance of last year (third place), but he completed a superb race: "This morning, I knew that I was 20 minutes away from the Top 5, so it was really difficult. I'm rather satisfied with my edition...the beginning of the week was a bit tricky, the Long Stage was a bit short for me, but I'm finishing in a good place."

No doubt that in 2020, for the 35th edition, the top favourites of the MARATHON DES SABLES will let guns do the talking again…