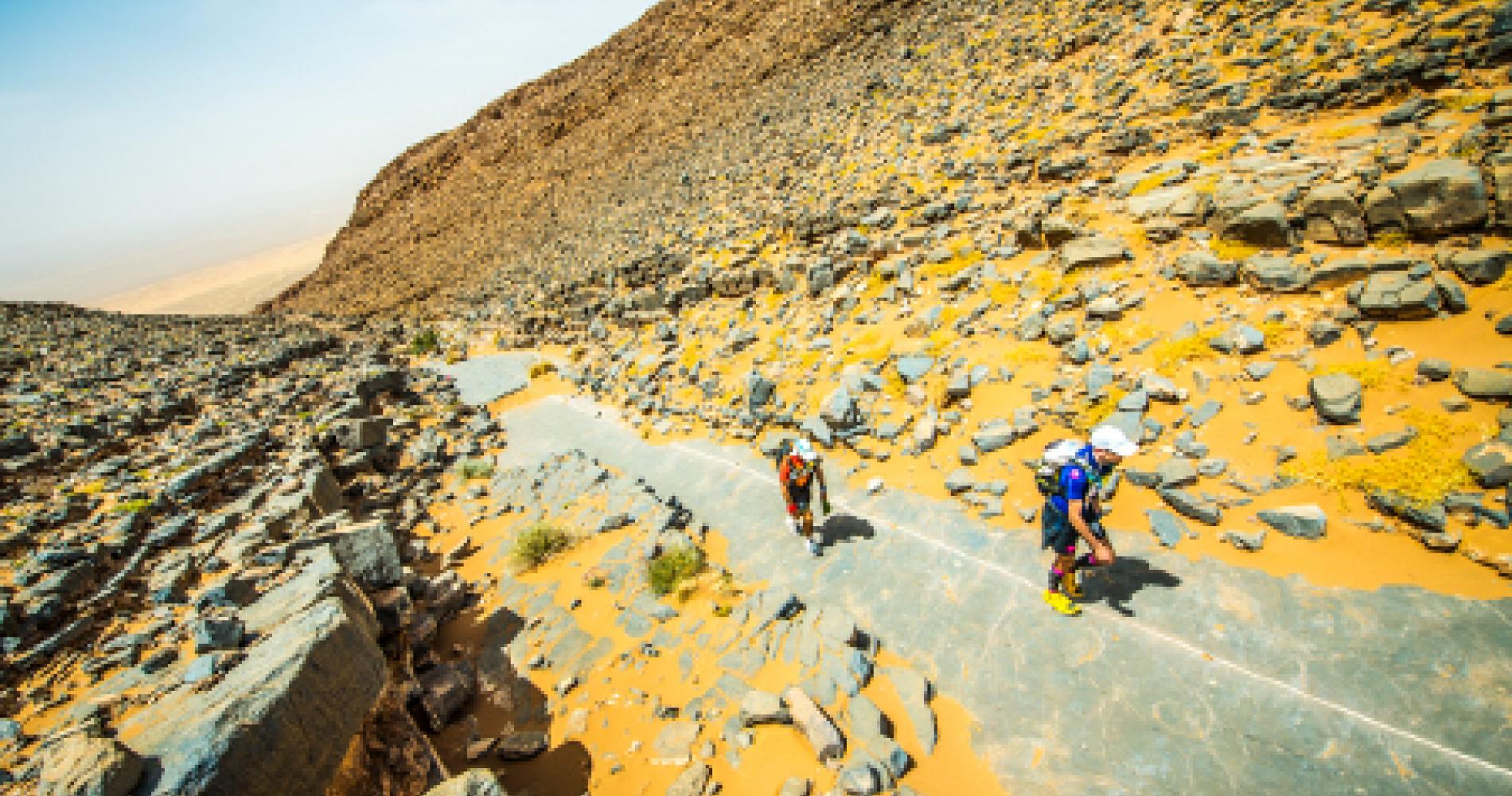 If yesterday's stage proved to be rather easy, today's course immersed the 976 competitors who took this morning's start in the "desert hell": tons of sand, a huge jebel to climb and descent, and oppressive heat due to a very high humidity level and a great contrast with the morning cold. This accumulation of difficulties will certainly cause many drop-outs throughout the day – already 5 at 1 PM, five hours after the start, including one of the favourite, Andrea HUSER (D1017-SUI).

STAGE OF THE DAY: STAGE 2

Description: More sand than during Stage 1, stifling heat, and the descent of the mythical jebel EL OTFAL.

976 competitors on the start line

The highlight of this 39-km-long 'Stage 2': jebel EL OTFAL, the mythical sandy face of which competitors will descend. The most experienced runners threw themselves into the impressive slope, with sand fanning out from under their feet, while the more careful competitors took dozens of minutes to go down the 250 metres of altitude change one step at the time, under a burning sun.

On the MARATHON DES SABLES, competitors used to camping feel at home, while those generally staying in 5-star hotels can feel somewhat disoriented... Coping with life on the bivouac is key to a successful MDS, regarding both sports aspects (recovery, food, etc.) and personal enjoyment (friendship, atmosphere...). In this very peculiar environment, in a Berber tent open to all winds, some people blossom: "Tent camaraderie is awesome...we really are a family," Richard ELLIOT (D0416-GBR) explains. "Last night, I slept better than the first 2 nights, when the excitement of being here troubled me." At the bivouac, bonfires – a symbol of human gatherings – generally crackle in front of each tent, but yesterday evening, at the heart of the triple tent ring, a huge collective fire warmed the souls of the 977 competitors who had completed the first stage – a formidable moment of communion under thousands of stars.

As regards food, practices differ greatly, from those eating cold or hot dishes to those preferring freeze-dried meals or mueslis... In the global picture, Sandra AMSTUTZ (D0968-SUI) is quite original: "I prepare my breakfast in the evening by soaking seeds in water for the entire night. And I have a small stock of prunes." During the stage, it is indispensable to eat something: cereal bars, dried fruits... Fast-release carbs (for immediate energy) and slow burning carbs (for longer-term energy) work hand in hand to enable participants to finish the stage without loss of form.

For this second stage, Rachid EL MORABITY (D0001-MAR) unleashed his power: after running in a group for the first third of the course, the 5-time MDS winner took off and built the gap in the uphill section – his favourite terrain. No one was able to keep up with him, and he reached the finish line more than 10 minutes ahead of his brother Mohamed. This is typical of Rachid's strategy: showing who the boss is and securing for himself a small lead that he'll then manage during the remaining stages.

In the Women's category, Natalia SEDYKH (D0220-RUS) had won the first stage, but she then received a one-hour penalty for lack of compulsory equipment. Despite this hard blow, she remains convinced that she can win the race...but to do so, she'll need to give it all she's got.

A few reactions from the Elite runners:

"The stage was beautiful, with sand, stones, rocks, and a mountain: the true MDS – thank you to the organisers! I climbed the mountain like a monkey, on my four limbs – a rather interesting experience... What about competition? My toughest competitor is myself. I'll have to surpass myself until the very end."

"I led the stage for the first 7 kilometres – such a pleasure to mark the track! Towards the end of the course, Aziz caught me up but instead of passing me, he was kind enough to stay with me until the finish line and take my hand so that we would arrive together: what a great memory this will be for me!”

"The stage was beautiful, but the mountain's ascent was tough. And then, the descent was incredible: it was a first for me to go down such a huge sand dune, and I had loads of fun."