TRAINING FOR THE HALF MARATHON DES SABLES (1 of 4) 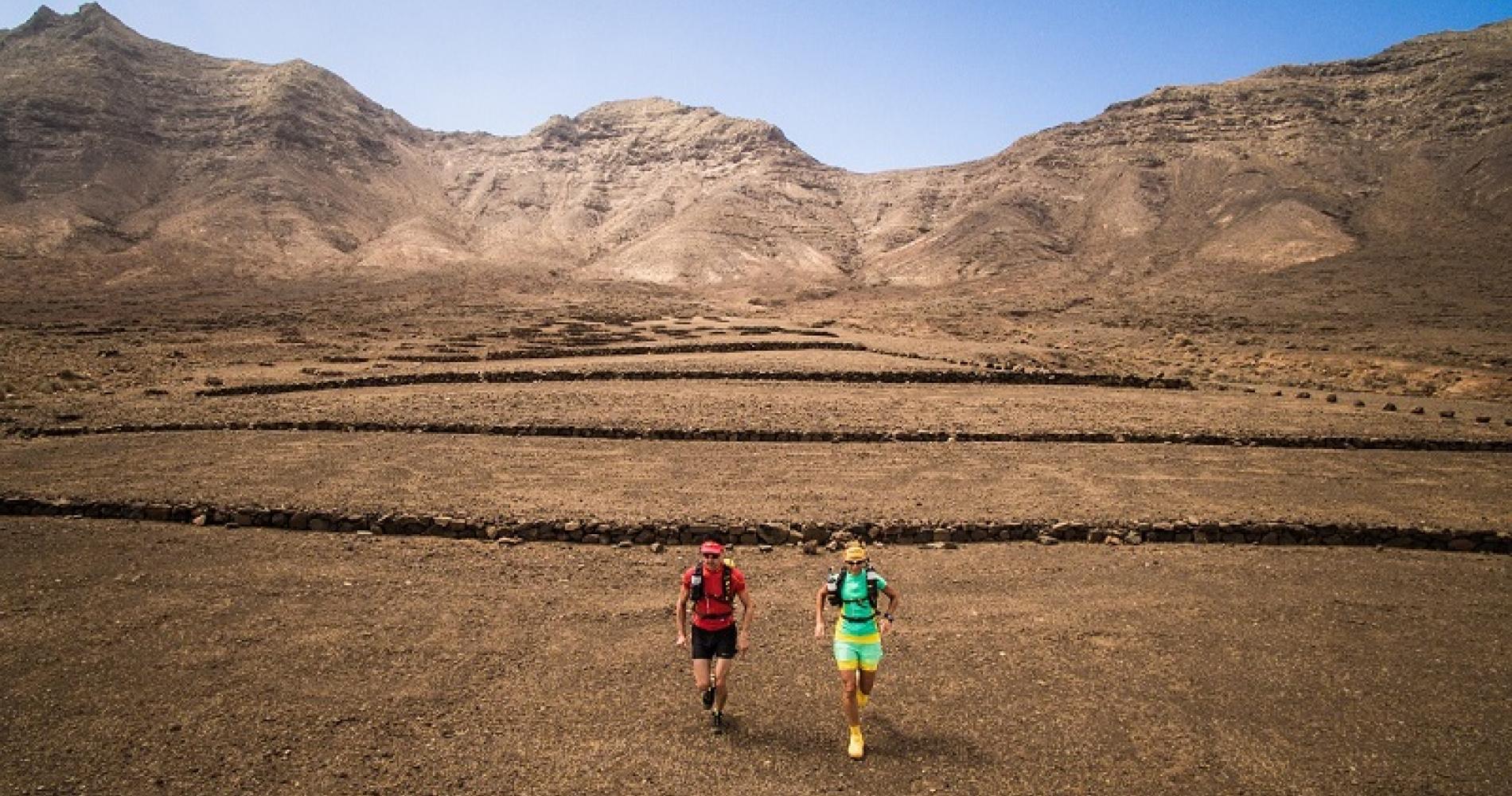 The HALF MARATHON DES SABLES is a course of approximately 120 km to be completed in four days — hardly a walk in the park. Even professional marathon runners rarely cover so much ground. Here are some training tips to help you be physically ready to endure the distance.

Naturally, to prepare to walk or run 120 km, you have to build up your endurance. As in everything to do with the HALF MARATHON DES SABLES, the way you go about this depends on what you want to achieve. Let's take four fairly typical examples of reasons for joining the pack.

To finish in time, you have to be able to maintain an average speed of more than 3 km/h for 120 km. This is a low speed that more or less amounts to a stroll. If you are used to walking, you probably go around 5 km/h, or 6 km/h if you push yourself a little. This qualifying speed is deliberately low to enable as many people as possible to finish the HALF MARATHON DES SABLES. This way, each year, some competitors cross the finish line without running a single metre.

• Your training priorities: walking, as soon as you can — to go to work, to do your shopping, to spend the weekend hiking, etc. If you repeat short walking sessions on weekdays and long walking sessions on weekends, that's perfect. If you can squeeze three to seven days hiking in nature on hilly or even mountainous terrain into the two months preceding the HALF MDS, that's perfect, too.

• For an added challenge: you can run a little, but be careful to avoid injury. Run at most three times per week, if possible on soft ground (or even indoors on a treadmill), for 35-45 minutes, at a pace that allows you to talk without being winded.

To finish in the first half of the pack, you have to be able to maintain an average speed of around 5.25 km/h for 120 km. Warning: don't forget that this speed takes into account everything that happens in each stage between when it starts and when you finish. Thus it includes taking breaks, eating, getting possible injuries treated, etc. Bear in mind all the areas where you will go at a slow pace: climbing jebels, crossing dunes, etc. That being said, finishing in the first half of the pack is achievable for all regular sportsmen and women who train three to five times per week.

Your training priorities: at least three and at most five running sessions per week under normal circumstances (you can push yourself a little harder for short periods of time). Around 70% of your training has to consist of basic endurance sessions — that is to say, jogging during which you can talk without being winded.

For an added challenge: during your preparation, set aside a few weekends to rack up as many hours of sports as possible — running, walking, cycling, swimming, etc. These shock weekends prepare your body to handle a lot of sports activity in a short period of time. Don't forget to rest afterwards (for a full five days)!

To make it to the Top 100, you have to be able to maintain an average speed of around 7.5 km/h for 120 km. The Top 100 is achievable for good sportsmen and women used to Ultra Trails, IRONMAN triathlons or 100-km or 24-hour events. The secret to making it to the Top 100 lies in two words: 'regularity' and 'lack of injury' (OK, four words!).

Your training priorities: at least five running sessions per week, with a typical Ultra Trail training session combining basic endurance, fartlek and speed work. Don't forget to squeeze two to three shock weekends into your preparation (another long event such as an Ultra Trail or an IRONMAN triathlon will do for a shock weekend, but be careful not to give it your all).

For an added challenge: do a 'dry run' a month before the HALF MDS in a shorter stage race (two to three days for up to 100 km) and a few home training sessions on a treadmill or in a sauna (or in a closed, heated room while wearing a sweater, which amounts to the same thing) during the month preceding the HALF MDS. Be careful to stay hydrated!

To make it to the Top 20, you have to be able to maintain an average speed of around 9 km/h for 120 km. This average speed comes out to around 25 hours of effort spread over six days, including a rest day (the second day of the long stage, since you will arrive in the evening or early in the night). This is what you need to remember for yourself: you will have to run or walk around 25 hours, under the conditions of a desert environment, at a speed that is as regular as possible and fairly low relative to your capabilities. In this way the HALF MDS is a little like an Ultra Trail.

Your training priorities: it's no secret — you have to plan your season to be in peak shape during the HALF MARATHON DES SABLES, with a foundation of marathon training. You must particularly emphasise long sessions and repeated effort to manage the distance and the repetitive aspect of the HALF MDS.

For an added challenge: consider shock weekends (without going overboard) and get a coach!

One secret in Ultra Trails is that muscle building is key. This is all the more true for a stage race in the desert like the HALF MARATHON DES SABLES. The muscle building that you do certainly has to be specific to running, but as a matter of harmony, coordination and avoiding imbalances, you need to do it from head to toe.

You can conceive of muscle building in different forms such as:

• a 100% muscle-building session: after a proper warm-up (jogging, jumping, squats and lunges), do as many series as possible of three pull-ups, 10 press-ups and 15 squats;

Obviously, running fast will not necessarily help you finish the HALF MARATHON DES SABLES. Indeed, your running pace in the HALF MDS, whatever it is, represents a fraction of your maximal aerobic speed (MAS). This is the maximum speed that you can sustain for around six minutes. The higher your MAS, the more capable you are of sustaining a 'fast' speed without drawing on your reserves.

Thus you would be well advised to work on your speed, specifically your VO2 MAX, which is a little like the displacement of your inner engine. To do this, interval training sessions are obviously the norm. These may be simple (30/30 sessions), complicated (pyramid sessions) or traditional (short and long sessions). They are to be planned according to your preparation cycle.

If you want to 'seriously' prepare for the HALF MARATHON DES SABLES, you should take the event for what it is first and foremost: an open-air running competition. This means that you should prepare a training plan consisting of three major parts:

a) a warm-up period,

b) a general preparation period and

These three periods are the fixed parts of training - a little like placing the pieces on a chessboard in their original positions. Then, the game will evolve according to their movements around the board.

a) The warm-up period

This starts after your annual break, lasts eight to 12 weeks and is followed by a relaxation period. This first part really is the foundation of training. Generally, it has no immediate effect on your performance, but it will enable you to handle tougher training afterwards.

It consists of longer and shorter low-intensity jogging sessions, muscle building and support work exercises, and an MAS session.

b) The general preparation period

This period lasts three to six months and really is the body of training. Its goal is to improve your aerobic capacity (in terms of both intensity and endurance) and your strength.

This period lasts four to eight weeks and is followed by two to three weeks of relaxation. It has to emphasise maintaining everything that has been accomplished with regard to specific pace and aerobic endurance work.

Now that a strategy has been laid out, here are four sample weeks corresponding to each of the three phases mentioned above. They are suitable for most competitors between the 101st place and the first half of the pack.

Athletes not used to MAS sessions can replace this session with jogging at a varied pace or jogging interspersed with 10 series of 20 seconds of running at 100% MAS followed by 20 seconds of rest by trotting (for example).

Athletes not used to MAS sessions can stick to a format identical to the warm-up period and add aerobic endurance sessions.