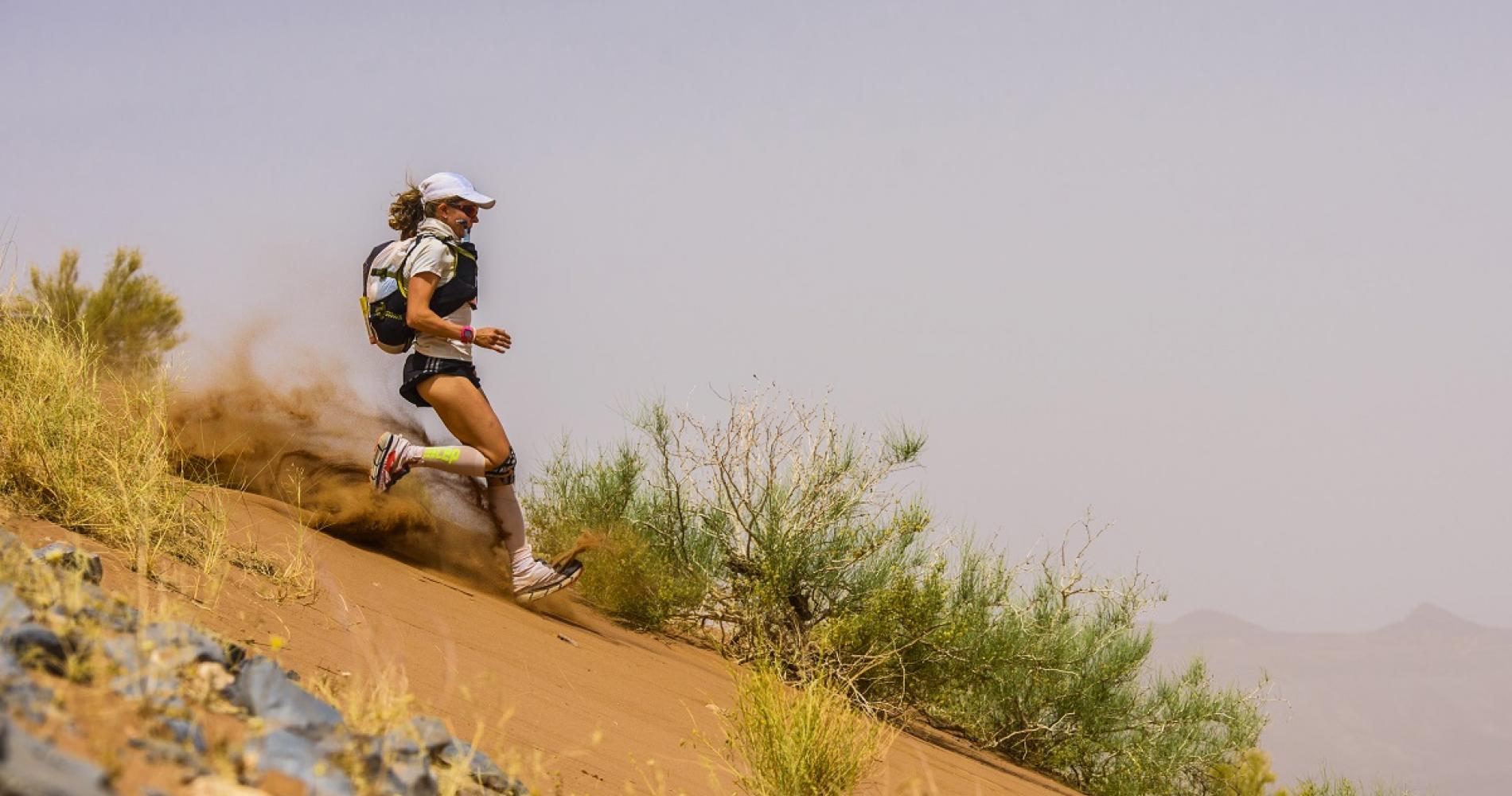 On April 5, 200 women will tackle the legendary desert event - the MARATHON DES SABLES, which is 250 km walk in 6 steps in the southern Moroccan Sahara, in food self-sufficiency. The motivations of these women are often deep, drawing from the experience of each. Their endurance and adaptability allow most to finish the event, and their motivation impresses more than one man in the pack.

From 5 to 15 April 2019 will take place the 34th edition of the legendary MARATHON DES SABLES, in the heart of the South-Moroccan Sahara. A thousand people from around the world will tackle this endurance monster of 250 km to walk on foot in the desert, in food self-sufficiency. Among these 1000 competitors, about 200 women will line up at the start of the event, a significant percentage despite the reputation of "the hardest race in the world" of MARATHON DES SABLES. But this reputation is perhaps also what motivates these women.

THE MYTH BEHIND THE MDS

The myth is also what attracted Nathalie BARBIER, 51, a teacher in the north of France: "This ultra-trail represents a myth for me. Running brings me well-being, energy and balance in a general way. I have already done several marathons, several trails up to 65 km, a 100 km, but the MDS ... it will be something else! "

Sandra OLANO, General Manager of a road transport group, married, three children, has always loved to challenge herself, sports or other. The MDS fits logically into this lineage: "I need to set myself goals to move forward. The 34th MDS will also be a moment for me to empty and find myself in a bubble without having to think but just to live the moment. "

For Emmanuelle ROMANZI, 40 years old, aeronautical engineer, this 34th MDS is a real homage: "My inscription is the gift of my mother for my 40 years from the bottom of her hospital bed. She died in September after an incredible fight. This MDS is therefore even more meaningful to me. "

At age 53, Cathy BOUE, a caregiver, suffered a serious illness from 2008 to 2010. The MDS is for her a way to celebrate life: "In 2008 my life rocked because of a serious illness: two years heavy non-stop treatments where despite everything I kept the morale and especially the desire to live. For me, for my family, I kept in mind this need to resort one day. Little by little I walked again, ran 100m, then always a little more, and two years later I finished the marathon of Toulouse! So participating in the MDS is a special motivation for me ... "

WOMEN AT LEAST AS STRONG AS MEN

Statistically, women are more likely to finish the MARATHON DES SABLES than men! Indeed every year, women are ahead of men in the percentage of finishers of the event. What is it due to?

Vivian LEE finished the 32nd edition of MARATHON DES SABLES after more than 52 hours of running and walking in the desert. The 46-year-old American is a perfect illustration of women's fabulous adaptability: "What did I learn? I can really go beyond if necessary. I am a manic person at home. I do not allow the wearing of shoes in the house, or that the covers are badly folded. During the MDS, I was not able to shower for eight days, and even washing your hands must be planned according to the water you have. Surprisingly, it went well. By the third day, I had no problem wiping my face with my dirty washcloth, and I was not flinching when a tentmate was cleaning his bulbs while I was eating right next door. I went into a survival mode, and I was able to leave out a pack of standards. "

Paradoxically, lack of self-confidence can lead you to be more prepared, and therefore to put the odds on your side, where some men leave "the flower with the rifle". Marine BEDIER, 30, from Aube, enrolled at the MDS to take a personal step in her personal life: "I am not someone very confident. Following my separation, I was very bad. I signed up for the MDS to help me get back on track. I'm waiting for answers on me. I need perspective on my life. "

Mireille MULL-JOCHEM, a 50-year-old business lawyer, is seasoned in long distance races, but leaves nothing to chance before the MDS: "I do not have the experience of a stage race of a year. such dimension. My goal will be to manage at best all the technical difficulties that I will be facing (heat, relief, night stage, weight of the bag, etc.). "

This state of mind, a mixture of fear in the face of the enormous task of the MDS and fierce determination to finish the event, is wonderfully summed up by Valérie HARD, 52, who has already completed the MDS in 2007: "The MDS c is the must for anyone looking for thrills, go to his entrenchments. Every woman has the abilities and the strength to face this ordeal, and I can only encourage them to live this adventure. "