“Women ? The odds are in your favor” 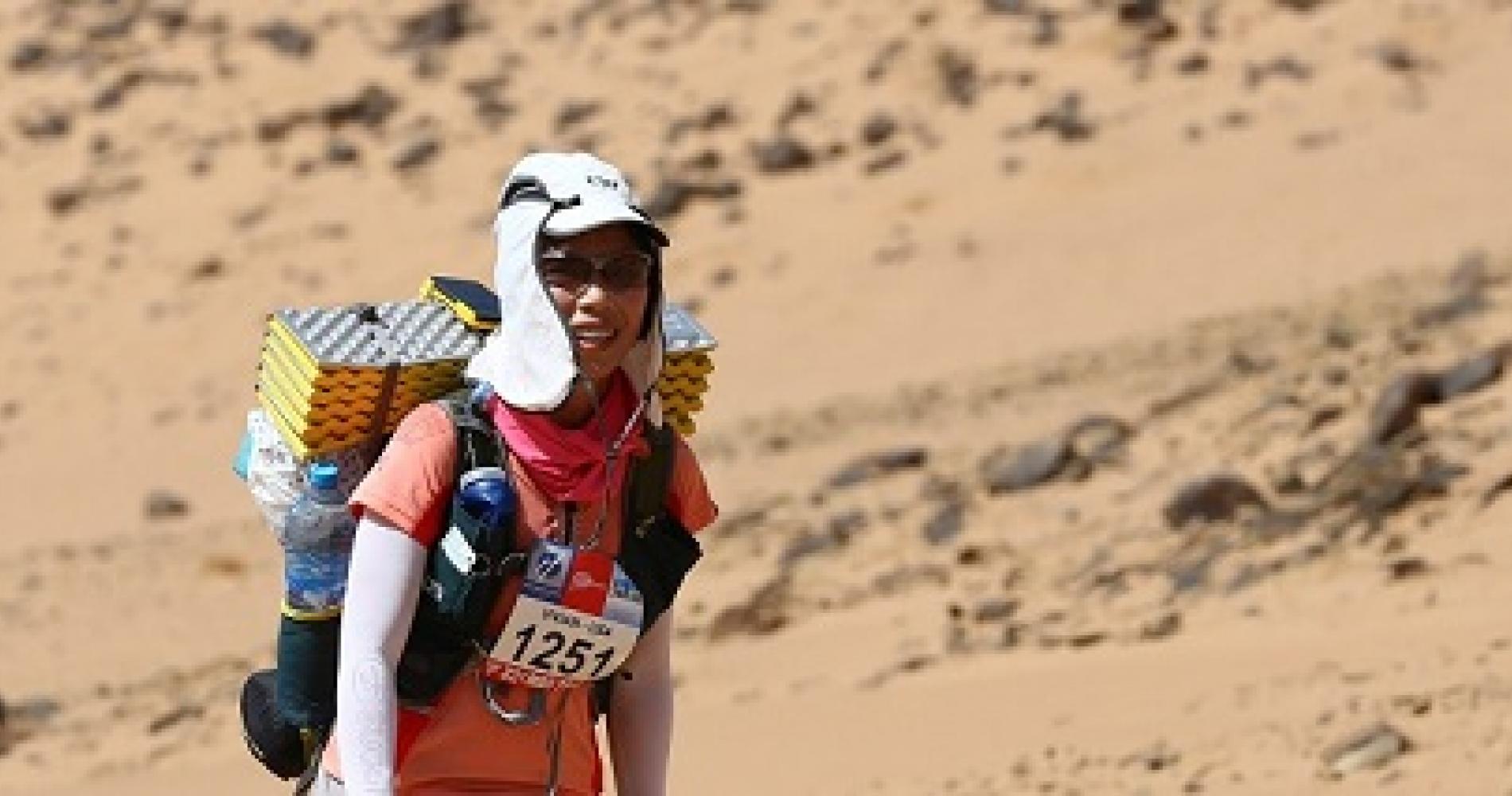 Vivian LEE (D1251-USA) finished the 32nd edition of the MARATHON DES SABLES MOROCCO in 791st position, after more than 52 hours of walking and running in the desert. This 46-year-old American has answered a few questions from the Time of San Diego, and her answers can be particularly interesting for future competitors ... Selected pieces.

Stage 5 was physically challenging but emotionally joyful for me. My feet were in the worst shape – eight blisters that got irritated with every step I took. That was the sixth day of the race and believe it or not, I started to get used to the discomfort. I had so many thoughts going through my mind that the entire marathon distance did not seem to be long enough to completely absorb all these feelings. I had never been so exhausted in my life before and desperately needed some rest and recovery. I was excited about crossing the finish line, which I had been envisioning so intensively for several months.

But somewhere along the way, little by little, one race after another, one step at a time, here I was in the middle of the Sahara Desert finishing the last stage of this toughest footrace on earth.

Many people found it unbelievable that I went from a nonrunner to an MDS finisher in 2-3 years. It was a surprise to me as well. All these races took some hard work, but are well within most people’s reach if you set your mind on it. The hardest step was the first step and that was the biggest lesson I have learned from running.

Again, Patrick Bauer was at the finish line to award every finisher the medal. When I got the medal on my neck, I hugged Patrick for a long time and said a bunch of things that I do not remember clearly. Probably something along the line of “Thank you!” “It was the hardest thing” or “I am so happy.”

Stage 4 was no doubt the longest and the toughest day in my life. The long stage could be done in two days and the organizer would provide some bivouacs and lounge chairs at Checkpoint 5 for runners to sleep if they choose to do so. At one point, I walked a dozen steps with my eyes closed and startled myself when I almost lost my balance. Once the sky started to brighten up and the sun rose, the dizzy feeling almost immediately went away – that is how amazingly our internal biological clock works.

What I learned ? I can really rough it out when needed. I am a clean freak at home. I do not allow outside shoes to be worn inside the house and fold blankets in a way that the end for feet never touches the end for head. During MDS, I could not shower for eight days and even washing hands had to be planned out with the limited amount of water. Surprisingly, I did pretty good. By Day 3, I had no problem wiping my face with the filthy glove, and would not even blink while eating next to a tent mate who was popping his blisters. It got me into the survival mode and I was able to let a lot of “standards” go.

My diet consisted of freezer dried food, calorie dense granola/museli, and energy bar/waffles. While preparing for MDS, I became obsessed with the weight since I had to carry every single gram for seven days. And food would be a major portion of the weight.

Based on those experiments, I settled down for around 2,500 calories a day. Knowing the target calorie/day, I created a spreadsheet to break down the food into “Pre-Race,” “Race” and “Post-Race” categories.

For “Pre-Race” food in the morning, I prepared various granola/museli to go with coconut milk (I bought the powder, and it is denser in calorie than whole milk.) During the race, I had energy bars, HoneyStinger energy chews and HoneyStinger waffles – the waffles taste really good!

I also used electrolyte drink tablets in the water to replenish the lost fluid. The protein powder was used right after each stage, which would help with faster recovery during a multistage race.

Dinners were freezer dried food like Mountain House meals. In order to save weight, I did not bring any stove or fuel tablets. I repacked the meals into Ziploc bags – since it is lighter! – and poured water into the Ziploc bag and placed the bag under the sun so that it would get lukewarm. Those meals would taste better if I cooked them with hot water, but I was not willing to carry the weight for the taste.

My backpack weighed 15 pounds at check-in without water. I always had one bottle of water at the start line and after each checkpoint, and that is an additional 3.3 pounds. Day 1 the pack was a little over 18 pounds when the race started, and every day it would get 1 pound lighter since I ate one day’s worth of food ration.

An advice to middle-aged women who might tackle MDS ? The odds are in your favor. Endurance sport is something that levels the age and gender differences. You do not see middle-aged female athletes breaking world records in track and fields meets, but there are plenty of course records set by middle-aged females in endurance events. DNF (Did Not Finish) rate is lower among female runners compared with male runners. Both the first- and second-place overall female winners were middle-aged. On the other hand, your competition will be fierce.