Rory Coleman is a British athlete who completed 15 MARATHONS DES SABLES. He will be there for the 34th edition from April 5th to 15th 2019.

You finished 15 MARATHONS DES SABLES. What drove you to run first? Then the second? Then the third? And why come back again and again?

I’d been running marathons for five years’ by Spring 1999 and felt that I had yet to find the ‘Ultimate Running Challenge’. The Marathon des Sables was really unheard of in the UK back then, and seeing a report of the race on TV, it immediately grabbed my imagination and I knew I had to enter. The whole experience changed my life – it gave me a time out to re-evaluate my thoughts and simplify my future. After such a life-revelation, it’s been an easy decision each year to return and experience the ‘High of the MdS’. What are your three most memorable memories in MDS?

The ‘Wet Year’ in 2009 with rain worse than a winter in Wales – with Race Director, Patrick Bauer saving the race - making the long day even longer, finishing 143rd overall, (my highest MdS finish) and meeting Jenny my wife on the last day of the race.

Training and accompanying Sir Ranulph Fiennes, the ‘World’s Greatest Living Explorer’ to the finish line in 2015 – a truly amazing honour to work with one of Great Britain’s National Treasures.

Climbing to the top of the 1000m-high Jebel on the long day in 2016, six months after being paralysed with Guillain-Barre Syndrome. A place I thought at one stage I’d never see again. What does a Rory COLEMAN training week look like?

None of my training weeks are the same as my running now works around my clients’ needs as I’m a Performance and Lifestyle Coach. After having Guillain-Barre Syndrome it’s difficult anyway to follow a schedule as it takes time now for my nervous system to recover.

In my early years of running I used to run 160km every week covering huge daily distances to become fit enough to run some of the bigger races I competed in.

Are you a convict of training, or rather someone who goes to the cool?

I’m very happy to get out and train where and when I can but I’m conditioned well enough to run 42.2km at any time and for as many days as I might need to. Luckily though, I don’t feel that I HAVE to run every day.

I know you ran over 1000 marathons ... it's just huge! Why this accumulation? What is your goal if you have one?

If you love running and achieving as much as I do for nearly twenty-five years, running 1000 marathons isn’t so difficult. It’s one hell of a record and in fact I’ve run over 50 marathons since being ill two years ago. I’ll continue running marathons for as long as I can or for as long as I want to. There is no end number planned. 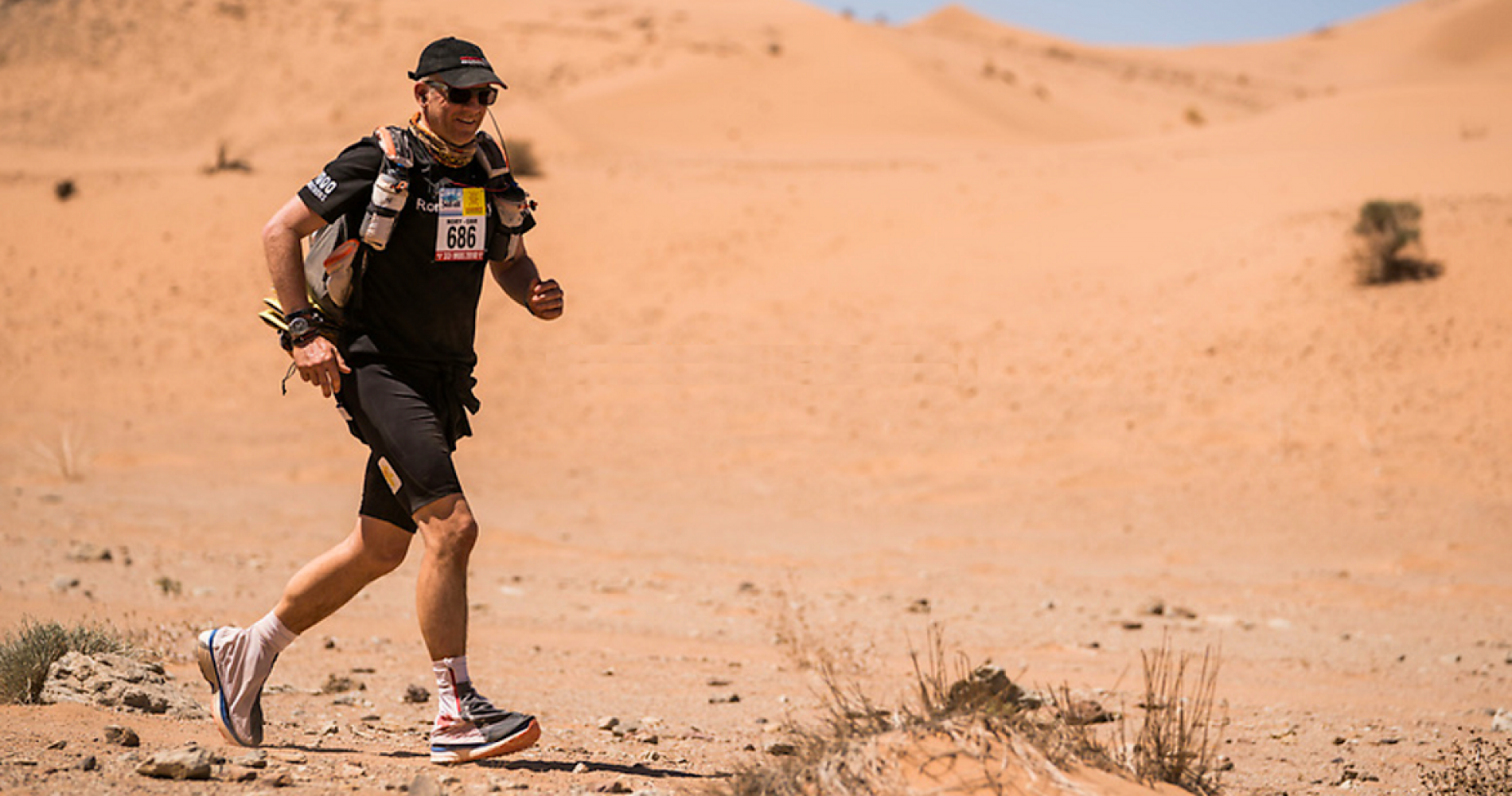 And what is your marathon speed record ?

Similarly, I saw that you held several Guinness records, what are they?

I have nine Guinness World Records for running the greatest distances in a set time on a treadmill. The one I’m most proud of is running 162.19km in 24 hours on the 17-18th October 1998.

On your Facebook profile, you indicate among 24 years dry. For you, is it something that defines you?

Being alcohol-free for 24 years’, is the record that I’m most proud of. Running has been my salvation and my therapy for all that time. When I started, I never set out to run one marathon, let alone 1000 - I just wanted to be dry and live life being sober. Every day is a positive for me and the MdS provides a retreat where I get to reflect and reaffirm my pledge.

I also saw last year on the bivouac your painted toenails, very pretty indeed even after a few days of racing!

Painting my nails has become a year-round thing that started at the MdS. I’ve been blisterfree for years now and whilst my tent-mates are tending their blisters it’s great to celebrate having pretty looking feet. It’s just for fun…

We also notice on the bivouac your joy of life…

For me, the MdS is a time for celebration and time out from my busy schedule in the sun and sand of Morocco. I look forward to the race like a child looks forward to Christmas or their Birthday perhaps and love every minute of the experience.

Are you a mad optimist?

I’m very optimistic but also a realist. I know I’m capable of completing the race and enjoy helping others complete and enjoy their MdS too is a real bonus. The MdS is all about the medal – no one cares if you are first or last – you either DID or DIDN’T run the MdS.

Do you have any tips to get you going, keep you smiling?

I listen to music a lot of the time and enjoy immersing myself in songs that have accompanied me in training and also in life. Pink Floyd often accompany me at the MdS.

With your experience on the MDS, what advice would you give to neophytes who will come for the first time in 2019?

Don’t weigh much – Don’t take much – And do some training.

Would you advise them to share your tent, or rather to take the exact opposite on the bivouac?

Sharing my tent makes the MdS a whole lot easier but you’ll need to be over 50 to be invited. Up-beat, energy-giving tent-mates are really important in making the race an even greater experience and most of my tent-mates over the years, have become life-long friends.
It’s the people I’ve met over MdS 15 that’s been the best part and I’m happy to call Patrick Bauer my friend – he IS the MdS and an inspiration to all that take part

“The MDS will be a first for many things.”

The little brother who has everything of a big one