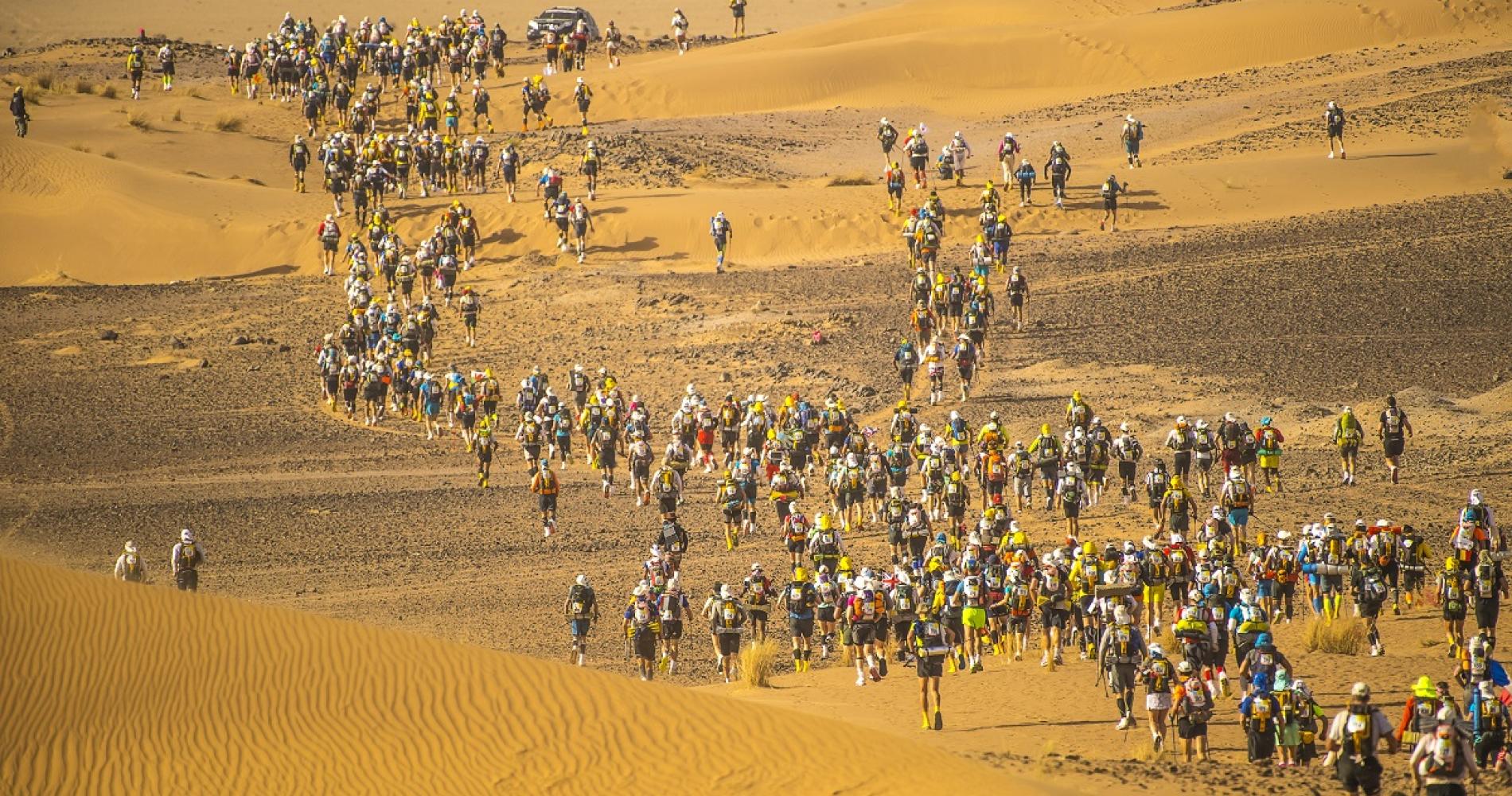 A new chapter of the legendary MARATHON DES SABLES will unfold in the Saharan dunes of South Morocco from 5 to 15 April 2019. The first event of its kind in 1986, the leading desert trail race for the number of participants and the leading self-sufficiency trail competition in terms of international fame: the legend of the MARATHON DES SABLES has been building up year after year, under the aegis of its equally legendary founder Patrick BAUER, who has been directing it for 34 years.

• Competitors arrive in Morocco on 5 April

In 1984, 28-year-old Patrick BAUER, born and raised in Troyes (Aube, France), decided to cross the Sahara on foot over 350 km, in full self-sufficiency conditions. This was an unprecedented experience in those times when people were rather dreaming of crossing the desert in a 4x4 (the Paris-Dakar raid was established in 1978). And two years later, he launched the very first edition of the MARATHON DES SABLES. Twenty-three competitors embarked on the challenge, at a time when foot racing was rather for specialists. Thanks to effective communication and extremely positive word-of-mouth, the event soon took off, with ever-growing numbers, an international fame and a professional organisation team. In 2010, for its 25th anniversary, the MDS welcomed for the first time more than 1,000 competitors. Since 1986, numerous events have followed in the footsteps of the MDS and drawn inspiration from its founding principles: 250 km, 6 stages, food self-sufficiency, and competitors carrying a backpack with all their gear for an entire week. Just like the New York Marathon made foot racing outside of stadiums more popular, the MARATHON DES SABLES has made desert trail events more popular, making it accessible to the largest number of people (over 95% Finishers) thanks to its unparalleled organisation team.

Since the very first edition in 1986, more than 20,000 people from every corner of the world have taken part in the MARATHON DES SABLES. And every year in April, around a thousand people—from professional runners to pure amateurs—gather to take up the challenge of crossing the desert. Helping them reach their 'Holy Grail' is an organisation team of 400+ people, including fifty healthcare professionals. The bivouac—which moves every day along the course—comprises over 450 Berber and Saharan tents, and the daily mounting and dismounting of this miniature city is a real tour de force! The idea of mixing so many different cultures in such a confined space was also a seemingly impossible challenge...yet it proves a winning bet, year after year. Indeed, after the first few hours on the bivouac, mutual assistance, friendliness and exchanges quickly smooth out all differences, and after one week of race, participants become true 'brothers in sand'.

For the last 23 years, the MARATHON DES SABLES has been placed under the high patronage of His Majesty King Mohammed VI of Morocco. Since its establishment, the race has been organised by Patrick BAUER, with the support of his Atlantide Organisation Internationale (AOI) team. The MDS and Morocco have built a trusting relationship that also contributes to the event's legend: the MDS was founded in Morocco, thus it will stay in Morocco. An MDS did indeed take place in Peru in 2017, but since the supervision conditions could not match the level of the Moroccan pearl, Patrick BAUER decided not to repeat the experience. Among the numerous races that derived from the MDS, two "HALF MDS" have been founded (one in the Canary Islands, the other in Peru) to offer a foretaste of the legendary race. However, these events are not organised by Patrick BAUER and AOI.

THE MARATHON DES SABLES IS SHINING ON THE INTERNATIONAL SCENE

With 49 countries represented in the pack of 2018, the international presence at the MARATHON DES SABLES is unsurpassed in the nature trail running sector. This motley pack is correlated with the global media impact of the event: each year, people on all continents closely follow the race—with France and Africa logically in the lead. And every year, the organisation team makes every effort to enable the media (more than fifty accredited journalists) to make high-quality reports, thanks to the best technical equipment: a satellite station, a control room truck, dozens of hours of videos made available to the TV channels, and hundreds of pictures sent to the media or posted on social networks. As a result, the MDS's website has over 3 million unique visitors per year, and the event is known by more than 25 million people throughout the world.

Rooted in the race's original spirit, supported by the Moroccan authorities, and guided by the competent and kind hands of Patrick BAUER and AOI, the 34th chapter of the legendary MARATHON DES SABLES is already in the making. As a Berber proverb says, "Trace a straight furrow and fix your gaze on a shining star." See you on 5 April 2019 in the heart of the desert.