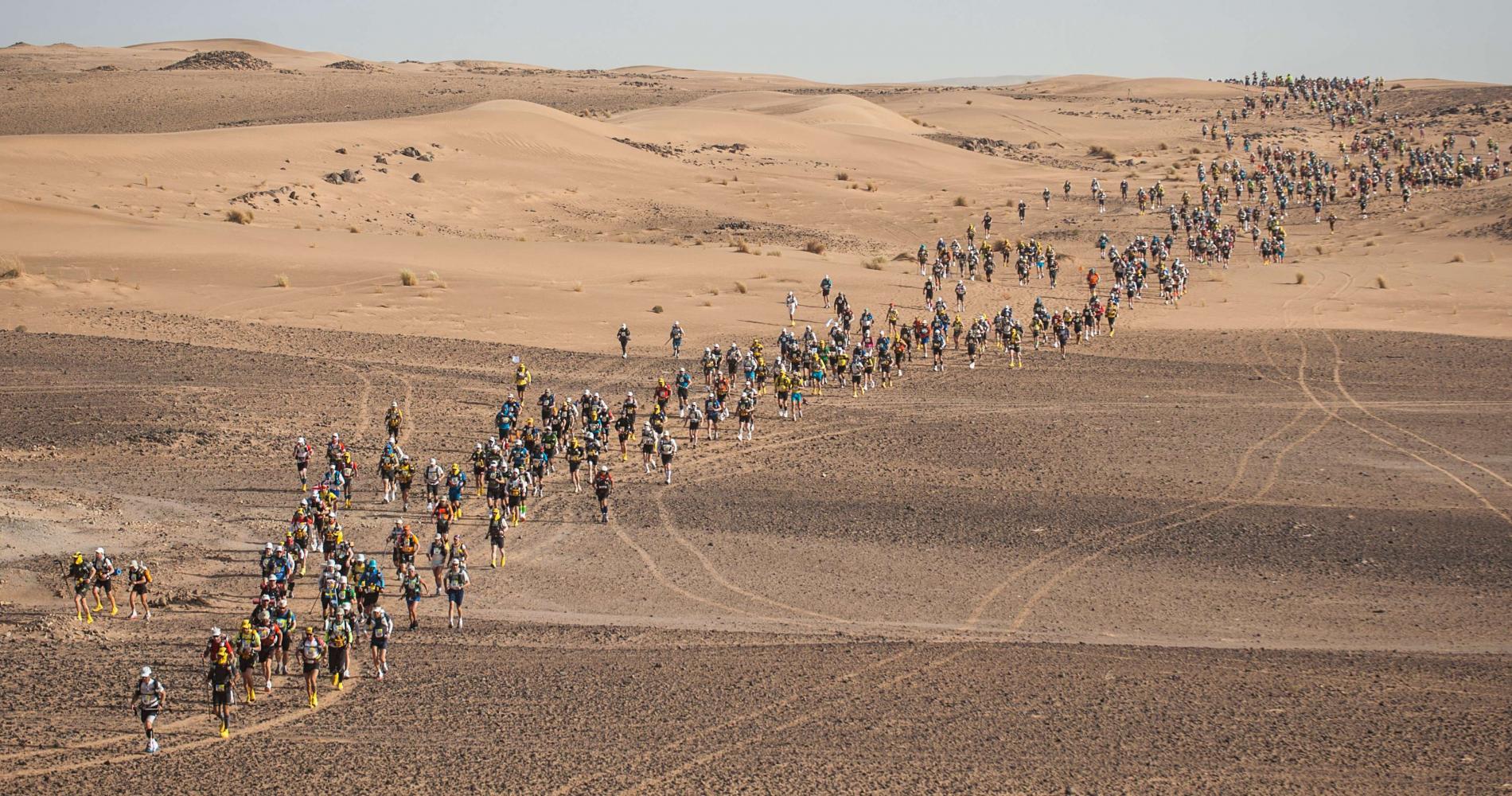 1984: Patrick BAUER alone in the Sahara1984: At 28 years of age, Patrick BAUER decided to make for the Sahara to try to traverse a 350km expanse of uninhabited desert, on foot, alone, where he wouldn’t come across a single village, oasis or watering place. Totally self-sufficient, with a rucksack weighing 35kg and containing water and food, he set off on a journey which was to last 12 days. It was the starting point of what was to become the MARATHON DES SABLES.

1986: The 23 pioneers of the 1st MARATHON DES SABLES : The creation of the first MARATHON DES SABLES in the Moroccan Sahara. The 23 pioneers who took the start never imagined that their footprints would mark the start of a legendary event, which today has become unmissable on the schedule for major adventure sport meets. The creation of a non-mechanical competition in the Moroccan sands offers adventure runners a wealth of new prospects.

1987: Creation of the MARATHON DES SABLES logo: the face of a runner covered by a keffiyeh, the eyes protected by a pair of sunglasses and the pipette from his or her water container clenched between the teeth. 1991: The Gulf Drama penalises the MARATHON DES SABLES and the financial partners withdraw. Fortunately some runners answer the call. For these competitors, the true victory lies in meeting athletes of different origins and their communion in the desert around the same goal. Sport proves once again that it can bring people together and create bonds.

1992: 7th MDS : One and the same regulation for everyone. This year sees the establishing of unexpected draconian tests, to ensure that each participant properly transports all his or her gear from one end of the course to the other. A 30-point charter is drawn up.
First participation by the Moroccan Lahcen AHANSAL

1995: 10th anniversary. Since the start, over 1,500 men and women have marked the desert with their strides and their passions.
Installation of a water pump for the inhabitants of the village of Ighef n’rifi (South of ErRachidia) – an idea by competitor Gilles FLAMANT and backed by Rolland BARTHES and Patrick BAUER. Its success is to be repeated again and again. 1996: First participation by Mohamad, a youngster of AHANSAL descent. The two Moroccan brothers set off together and rank 4th and 5th respectively.

1997: This year heralds the start of the AHANSAL saga. Morocco is honoured with first victory going to Lahcen. He beats his two pursuers, despite them being international long-distance running champions, by nearly 30 miles.

1999: A mobile hospital on the MDS comes into being. There are around thirty practitioners on the ground, with doctors and nurses joining the caravan. A dedicated helicopter and ten cross-country vehicles track the competitors each day. Onboard these vehicles there are doctors of course, as well as high-tech equipment. The village boasts a genuine field hospital.

2000: Internet makes its entrance into the large MDS village. The organisation decides to broadcast the texts and photos of the race live, day after day. The competitors can communicate with their nearest and dearest and receive messages of encouragement.

2001: For the first time the long leg, traditionally called “The 70”, exceeds the 80km barrier to reach 82km. The threshold of 240km is also surpassed since the 16th MDS spans 243km. Another first relates to the fact that there are no Moroccans on the podium this year.

2002: This edition is punctuated by a sandstorm, involving headwinds, which lasts the entire week. The doctors invent a machine for ‘low pressure cleansing’ to rinse out the runners’ eyes. Despite the difficult conditions, there are few retirements to report as the wind considerably reduces the temperature.

2005: The Luxembourg runner Simone KAYSER is the first woman to win 3 MDS. For this 20th edition, the total number of runners exceeds 700 for the first time, with no fewer than 777 runners taking the start.

2006: A drying wind and very high humidity levels cause damage to the runners’ bodies. Despite additional allocation of water, a whole series of retirements ensue. There are a total of 146 retirements ultimately, which equates to double that of the previous record... Race management decides to shorten the long leg by over 10km given how tired the runners seem. 2009: Flooding in Morocco. Most unusually the MARATHON DES SABLES is disrupted by flooding in Morocco. The 1st and 6th leg weren’t able to take place. The organisation, to avoid the flood zones, is obliged to improvise new legs on a day-to-day basis. In this way, the edition goes down in legend for its 3rd leg, which is the longest-ever contested: 92km of sand, loose stones and rocks... The leg even sees the retirement of Lahcen AHANSAL. During the prize-giving, the 2 winners admit to having competed in their hardest MDS. However, it was also the shortest: 202km.

2010: For its 25th edition, the number of participations reaches a record high of 1,013 participants. It is to be the longest MARATHON DES SABLES. It spanned 250 kilometres with a course considered by former entrants to be the most difficult ever organised.The Solidarité MARATHON DES SABLES association is created. The aim: to develop projects to assist children and disadvantaged populations in the domains of health, education and sustainable development in Morocco. 2012: A dramatic turn of events on the longest leg as the then leader in the overall standing, Rachid EL MORABITY (MOROCCO) injures himself one kilometre from the finish. Medical examinations reveal a serious muscular lesion in the quadriceps. After over five years on the 2nd or 3rd step of the podium, Jordanian SALAMEH AL AQRA secures the title.

2013: 1027 competitors at the start line, a new participation record. New feature: a final “Charity” stage sponsored by UNICEF and crossing the Merzouga dunes rounded up the race. Sportswise, Mohamad AHANSAL and Megan Hicks were the champions of the 231.5 km. On a human level, all of the finishers won their crazy bet.

2014: 1029 competitors at the start line. Winner in 2011, Moroccan Rachid EL MORABITY (MAROC) won the overall ranking and takes Mohamad AHANSAL’s crown. In the women’s category, Nikki KIMBALL (USA) has stamped her mark over the past 5 stages to take outright victory. The major athletics star, Moroccan Hicham EL GUERROUJ will be at the start of Saturday’s Unicef Charity leg. An electric atmosphere coloured the arrival of the last finishers in the long leg, who were greeted by the whole bivouac. 2015: 30th anniversary of the race, with 1,300 competitors on the start line (new participation record).

2017 : we knew Rachid EL MORABITY, we will now rely on Mohamad, his little brother! The two Moroccans dominated the 32nd MARATHON DES SABLES, ahead of the surprising Thomas EVANS, a British soldier who made a great race. Elisabet BARNES won a second victory in front of Nathalie MAUCLAIR and Fernanda MACIEL. Note that for the first time, an amputee of both legs ends the MDS! It is Duncan SLATER, British veteran of Afghanistan.

2018 : The Frenchman Mérile ROBERT gets on the third step of the podium, the best French performance since 2002. In women Magdalena BOULET comes to add a victory for the United States.

2019 : Rachid EL MORABITY (MOROCCO) takes his 7th victory. Only three to catch Lahcen AHANSAL. On the women's side, it is a first victory for Ragna DEBATS (Netherlands), the World Champion of Trail. To note the second place of Aziza RAJI, the Moroccan who goes up in level and would like to join her elder Touda DIDI in the list of the laureates of the MDS. Finally a dog nicknamed Cactus joined the peloton during the second stage and traveled 192 km with the competitors! He was returned to his mistress at the end of the race, with his medal of course. 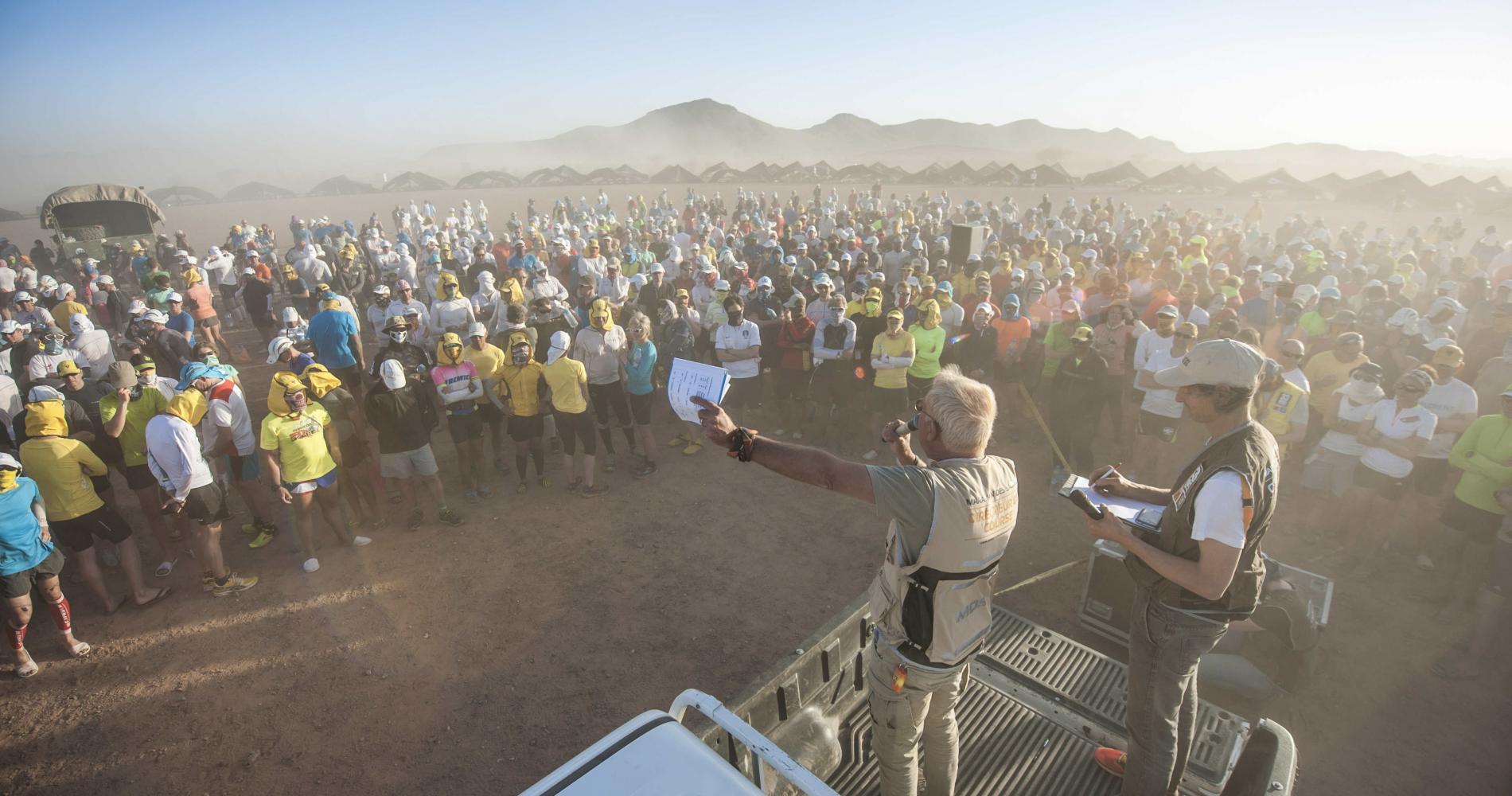