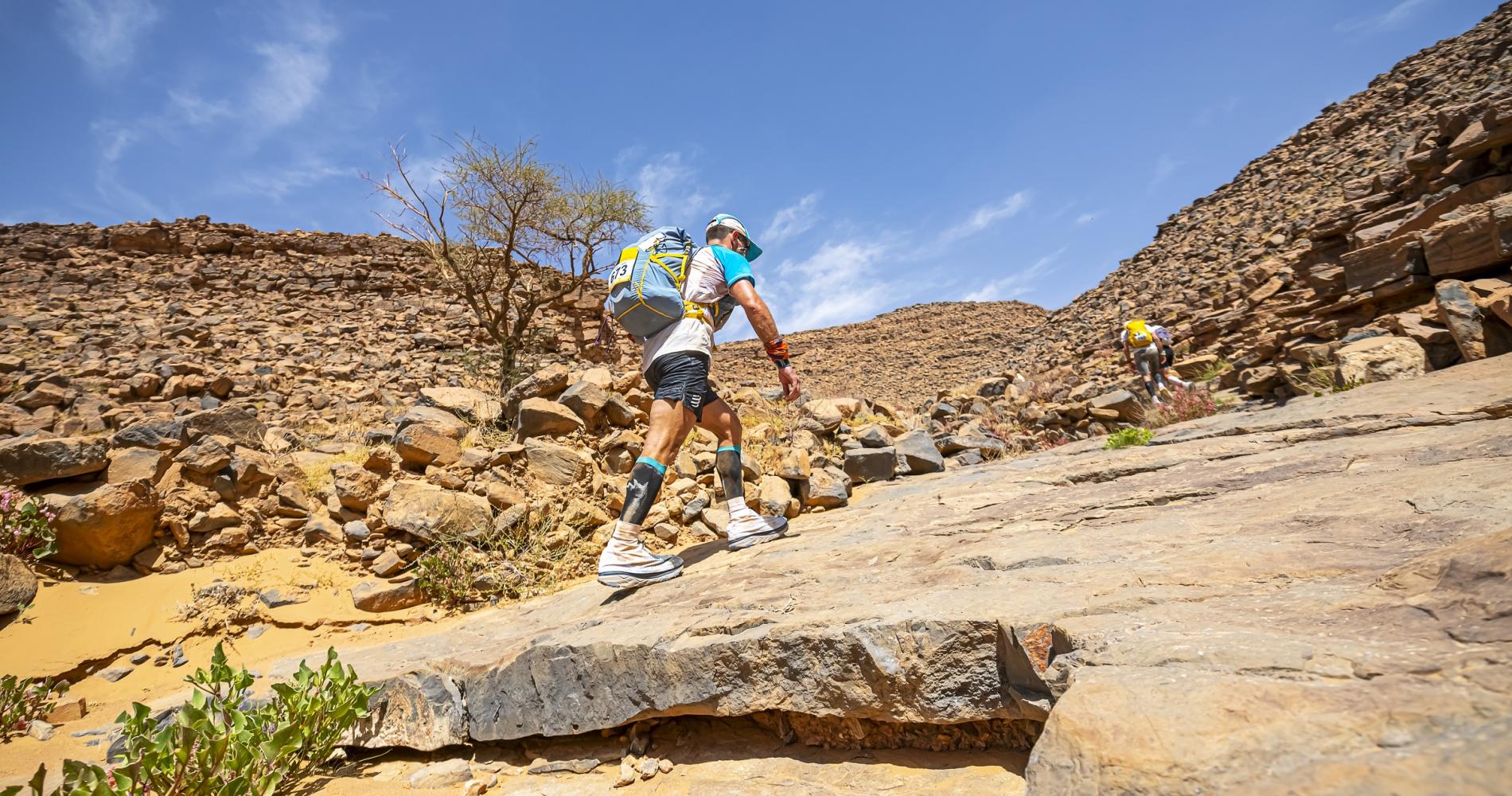 The second stage of the 36th MARATHON DES SABLES took place under strong gusts of wind—a storm similar to the one that hit the general ranking, now dominated by the young Moroccan Aziz YACHOU.

If yesterday's first stage of the 36th MARATHON DES SABLES proved to be rather accessible, today's stage plunged the 892 competitors present at the start this morning into "desert hell": a lot of sand, a huge djebel to climb and then descend, high heat, and violent gusts of wind sweeping the course and the bivouac. Yesterday, only 6 participants had to drop out, but this morning before the start, many competitors had fears about the day ahead: "Our shoulders and back are already sore, some in our tent have blisters on their feet or had cramps during the night. Today, psychologically, it's going to be the hardest stage," commented Nicolas MARÉCHAL (D86-FRA) before the start.

The other storm of the day was the one that hit the Men's ranking: it is now Aziz YACHOU (D15-MAR) who leads the overall classification of the 36th MARATHON DES SABLES. Scenario of the day: Mohamed EL MORABITY (D2-MAR) got off to a great start and led the race solo at a very fast pace until the finish line. Aziz YACHOU, 23 years old, managed the gap perfectly, keeping the youngest of the EL MORABITY siblings in his sights. And finally Rachid, the eldest—who won the MDS 8 times—tried to limit the gap with Aziz, knowing that he was threatened. In the end, Mohamed arrived more than 4 minutes before Aziz, who finished second, and 7 minutes before Rachid, who arrived third. Mérile ROBERT (D59-FRA) offered himself a very nice fourth place on the stage and a move up to the fourth place overall.

In the Women's category, there was no change in the rankings, but the gaps increased. This morning, Anna COMET PASQUA (D906-ESP) was determined: "Yesterday was my very first stage at the MARATHON DES SABLES, so I ran cautiously. Today I'm going to speed up." And indeed, Anna led the stage solo from start to finish at a good pace, finishing fourteenth in the scratch classification. In the Women's overall ranking, she is ahead of Sylvaine CUSSOT (D129-FRA) by nearly 17 minutes, and Aziza RAJI (D5-MAR)—who didn't do so well on this stage, finishing only fourth—is 46 minutes behind her.

The highlight of this second stage totalling some 39 km was the jebel EL OTFAL, where the competitors descended the mythical sandy face. The most experienced runners threw themselves into the impressive slope, with sand fanning out from under their feet, while the more careful competitors took dozens of minutes to go down the 250 metres of altitude change one step at the time, burnt by the sun and lashed by the wind. The MARATHON DES SABLES is definitely not a walk in the park!