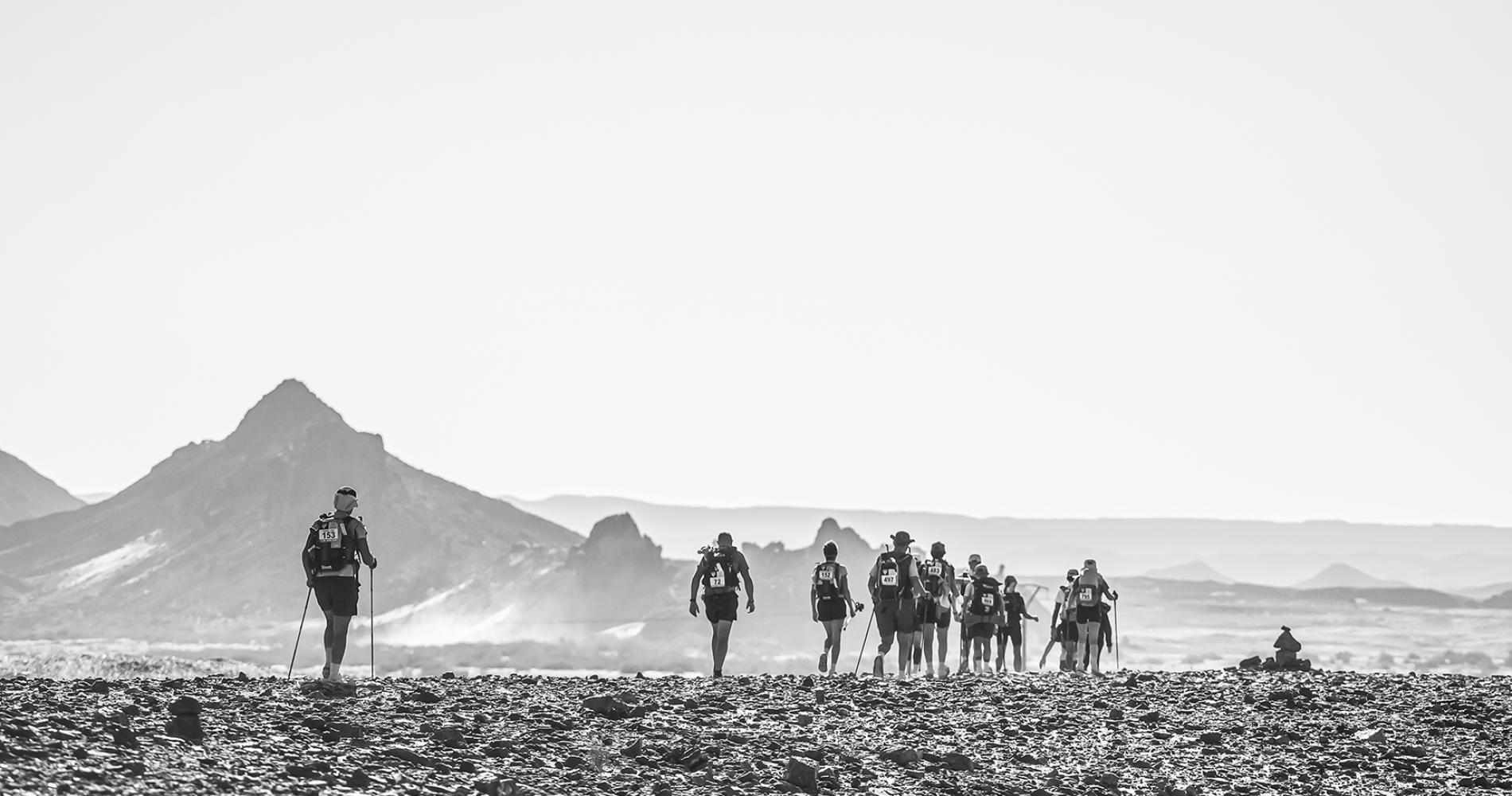 With a little less than 90% of Finishers, this 36th edition of the MARATHON DES SABLES confirms its status as a difficult edition, strengthening the merit of Rachid EL MORABITY for his ninth victory and Catalan Anna COMET PASCUA for her first win.

To leave an unforgettable memory to the 803 competitors of the Marathon stage of this 36th MARATHON DES SABLES, the desert decided to raise the temperature a little: it was in a real revolving heat oven that the "sand convicts" had to cover this last stage counting for the overall ranking—an impression of heat further reinforced by the black ground of the last ten kilometres. Sandstorm, heavy rain, and excessive heat: nothing was spared to the participants this year, which made them savour even more the finish of this relatively easy fifth stage.

As usual, Patrick BAUER, Race Director, is waiting for every single competitor—from the first to the last—to give them their FINISHER medal. These 70 grams of metal are the consecration of this week of walking or running in the middle of the South Moroccan Sahara. The emotion is palpable at the finish line, and even the most robust and toughest men have difficulty holding back their tears. And though these voluntary desert castaways were immensely happy to cross the finish line of the Marathon stage, the comments here and there showed an ounce of sadness: tomorrow, the 'Solidarité MARATHON DES SABLES' stage will only be 7.7 km long, and then it will already be the end of the adventure…

Once again, the strategy of the EL MORABITY brothers paid off: Rachid (D1-MAR) wins this fifth stage, with enough advance to pass his brother Mohamed (D2-MAR) without being worried by Aziz YACHOU (D15-MAR). Running at high speed, the two brothers took the race in their own hands, followed closely by Aziz. It was only in the last kilometres that Rachid accelerated again, while Mohamed eased off. Aziz didn't have much to try at this point of the race and finished between the two brothers... The time to complete the stage—a little more than 3h07mn—lets us imagine the effort deployed after this week of racing. Also worthy of noting are the lesser performances of Abdelkader EL MOUAZIZ and Aziz EL AKAD, both 53 years old and compatriots of the two brothers, who had been close behind them until now but who could not keep up with the pace this year. Rachid won his ninth MDS at just 40 years old, leaving the second place to his brother Mohamed, ten years his junior. Aziz YACHOU, 28 years old, climbs on the third step of the podium, one rank better than his fourth place of last year. Rachid EL MORABITY is now close to his dream: to win 10 times and join Lahcen AHANSAL in the legend of the MARATHON DES SABLES.

The first Frenchman Julien CHORIER (D126-FRA) finished fourth of the stage but remained in sixth place of the overall ranking. For his part, Mérile ROBERT (D59-FRA) took the fourth place, which is more than satisfactory given the opposition this year.

In the Women's category, Anna COMET PASCUA (D906-ESP) left no stone unturned for her pursuers: she managed the fifth stage like the previous ones—at her own pace—without getting into the red zone, and it paid off: fifth stage victory and logical final victory. At 39 years old, Anna becomes the second Spaniard to win the MARATHON DES SABLES, after Monica AGUILERA in 2010. She also finished twelfth in the scratch classification, demonstrating the value of her performance. To date, only two women have managed to enter the Top 10 at the MDS: the Frenchwoman Christiane PLUMERE in the first edition in 1986 (9th) and the Italian Franca FIACCONI in 2001 (8th).

Three surprises on the stage podium: the British runner Bethany RAINBOW (D728-GBR) is between the Spaniard and the two Moroccans Aziza EL AMRANY (D6-MAR) and Aziza RAJI (D5-MAR). This is the "Marathon stage" effect: on the last stage counting for the overall ranking, we often see a renewed vigour among participants who had been preserving themselves until then to get through the Long Stage without any damage. The second surprise is the counter-performance of the French runner Sylvaine CUSSOT (D129-FRA), who arrived only eighth, just behind Laurence KLEIN (D73-FRA), who ran a very nice Marathon stage. These few particularities did not change the overall ranking: Sylvaine and Aziza EL AMRANY complete the podium, leaving Aziza RAJI at the fourth place after her victory last year.

This evening, the podium ceremony will bring this week of competition to a close, leaving tomorrow for the Charity stage, a last moment without any time pressure before letting the desert return to order...until next year.