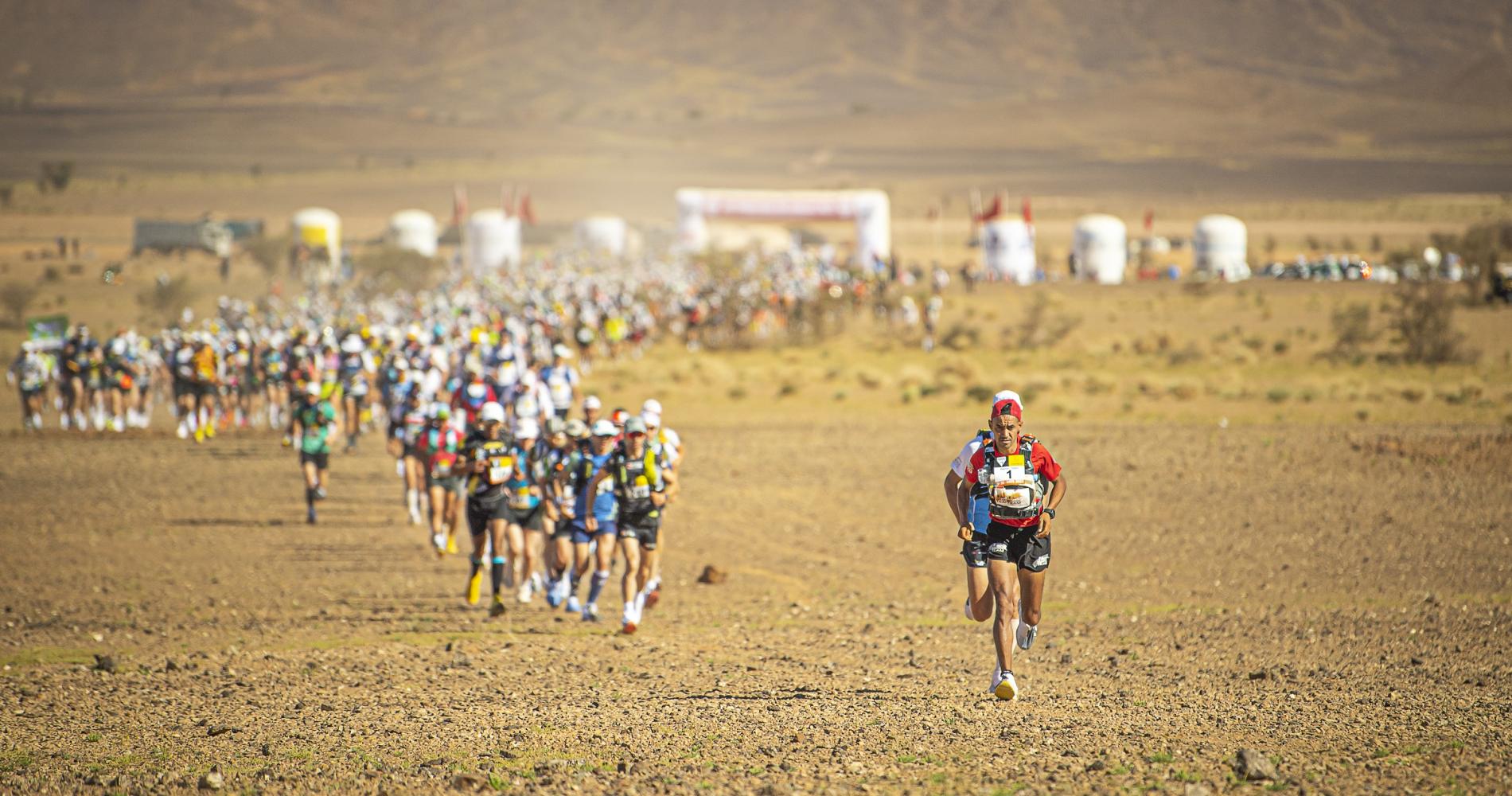 The start of the MARATHON DES SABLES was given this morning at 9am GMT: 903 men and women set off on the first stage (30.3 km), heralding a superb 36th edition.

A lot of motivation and a bit of stress: that was the cocktail this Sunday morning for the start of the 36th MARATHON DES SABLES. 903 participants set off for 30.3 km of stony plateaus, dunes, rocky gorges and dry wadis. If all the announced favourites showed up at the start line, a few anonymous participants could not make it—because of positive PCR test before travelling to Morocco, injuries, illnesses, professional impediments...

Overall, the stage was smooth—with three dunes to cross—but it was a tricky one, as Geoffrey PLISSON (D87-FRA), eleventh in the scratch classification, said before the start: "It's going to start fast! We'll have to hold on, but with the bags fully loaded, it's going to be hard." And indeed Rachid EL MORABITY (D1-MAR)—in search of his ninth MDS victory—takes the lead of the pack at more than 15 km/h. Cédric FLEURETON (D249-FRA) was the only one to follow the Moroccan's pace until the first checkpoint. But little by little, the Frenchman was outdistanced,then and caught up by Aziz YACHOU (D15-MAR), who outran him in the last kilometres and even came back on Rachid. Aziz wants to take his revenge on 2021: he had finished fourth despite a one-hour penalty for lack of compulsory equipment. Mohamed EL MORABITY, Rachid's younger brother, crossed the finish line in third place, obviously not in the best of shape. Could the EL MORABITY brothers be in danger this year?

On the women's side, no surprise in the ranking: the favourites are there! The two first ones are neophytes on the MDS but of a very high level: Anna COMET PASQUA (D906-ESP) took the lead and never let it go, but Sylvaine CUSSOT (D129-FRA) hung on and didn't let herself be distanced. Aziza RAJI (D5-MAR)—last year's winner—completes the podium at only a few minutes. This first stage presages a fierce female competition!

Further back in the pack, the spirits are far from these podium considerations: the objective is "just" to reach the next checkpoint, then to reach the finish line, and then to rest, take care of themselves, prepare their meal, and sleep while waiting for tomorrow's stage. Delphine MAILLARD (D244-FRA) is one of those anonymous competitors at the heart of the pack: "In October I was a volunteer, and I learned a lot. The objective is to enjoy, to discover the landscapes and to cross the finish line of the last stage, hopefully with all my friends."

Tomorrow, a 38.5-km stage with a big difficulty before the finish line: crossing the famous jebel EL OTFAL. But until then, all participants will enjoy a well-deserved rest.