“Defeat is not an option”

After ten years in the Royal Air Force, Duncan SLATER was serving in Afghanistan in 2009 when his vehicle was blown up by an explosive device. His entire body was badly damaged, with only his right arm left intact. His legs were in a particularly bad state: “When I was wounded, my doctor told me that I would never walk again without pain.”

Like for many wounded soldiers, a long rehabilitation period began. Twelve months later, Duncan was told that his legs would never be any use to him, and would even be a significant handicap for the rest of his life. A double amputation was decided on: “When I was amputated, my first thought was that my life was going to be restricted. So I’ve put all my energy into proving the opposite. I want to show that people who’ve been amputated can do the same things as everyone else.”

Since then, Duncan SLATER has been working twice as hard to make up for his physical disability. He joined the association Walking With The Wounded, which raises funds to help injured servicemen and women and helps them find employment. “The support that they bring former soldiers is vital: I’ve seen what they do by giving value to wounded service people.” 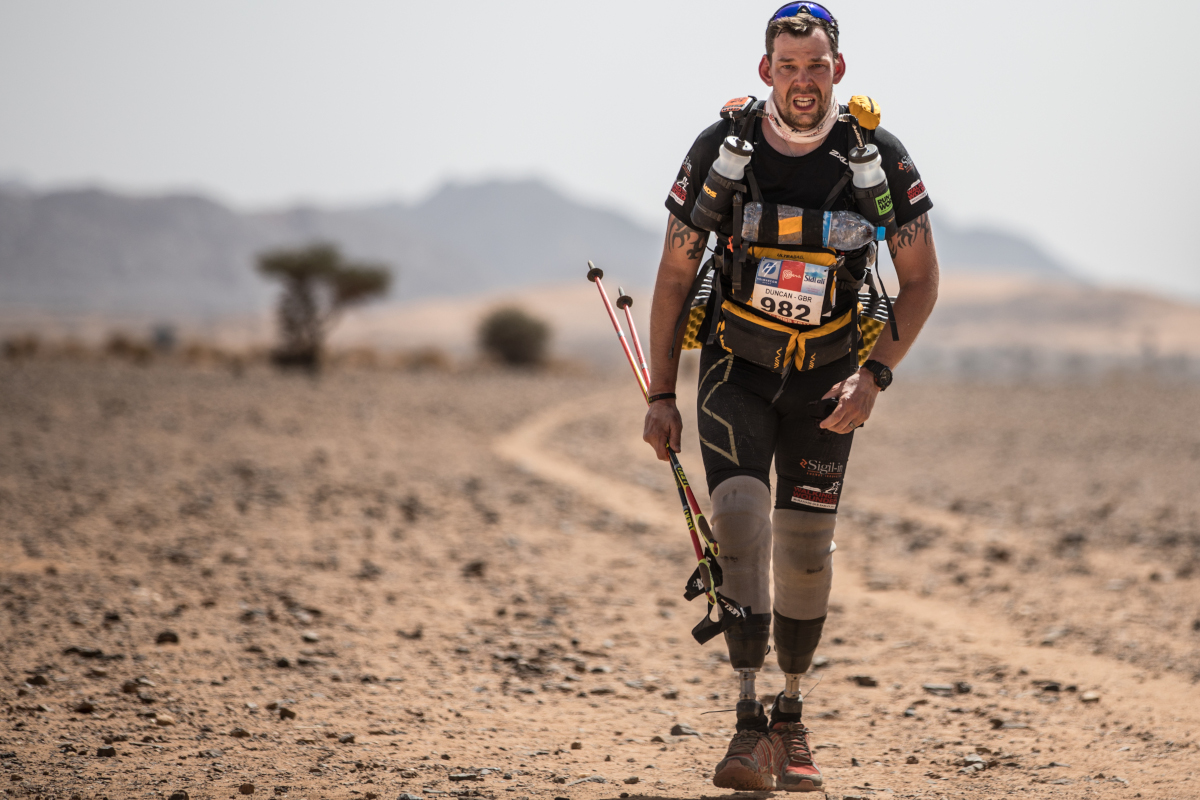 In 2016, Duncan was the first double amputee to take part in MARATHON DES SABLES. Unfortunately, the effort and difficult living conditions took a toll on his stumps and an infection set in. The former solider risked serious complications. With a heavy heart, he was forced to withdraw. Yet this was not the first time that he had taken part in “extreme” events. In 2013, for example, he successfully skied to the South Pole with Walking With The Wounded. He has even met Prince Harry twice, once on the polar expedition, and during his MDS training: “He made a surprise visit while I was training in a hot chamber at the Institute of Naval Medicine in Gosport.”

Impossible, then, for him not to make another attempt at the adventure. So at 38 years old, he was on the start line of the 32nd MARATHON DES SABLES, fitted with high-tech prosthetics and all the wiser thanks to his first experience: “I’m particularly dreading the Long stage. It’s a very long distance, and I don’t like the idea of crossing the Sahara in the dark!”

Accompanied by his best friend, Chris MOORE, a member of the same regiment at the time of his injury in 2009, Duncan SLATER progressed at between 3.3 and 4.4 km/h depending on the duration and type of stage. His ranking, at nearly 1000th out of 1167 competitors on the start line, was not an issue; his target was to have a medal hung round his neck by Patrick BAUER when he crossed the marathon finish line. And he literally earned that medal with his guts: Duncan finished the long stage dehydrated, having vomited profusely during the night before the marathon stage. But, as he likes to repeat, “Defeat is not an option.” And so with an empty stomach and very little energy left, the veteran was obliged to push himself further still to reach the finish line.

Exhausted but delighted to have seen his project through, he repeated his mantra: “I really hope that my efforts will inspire other disabled, wounded and ill people, and that I’ve shown them that you shouldn’t hesitate to ask for help, and that there is a life after injury”.

Duncan will once again be at the start of the 35th MARATHON DES SABLES, surrounded by around 30 competitors who will participate in Walking With The Wounded.

“I MISSED THE MDS A LOT”

THE MDS IS MYTHICAL AND VERY DIFFICULT